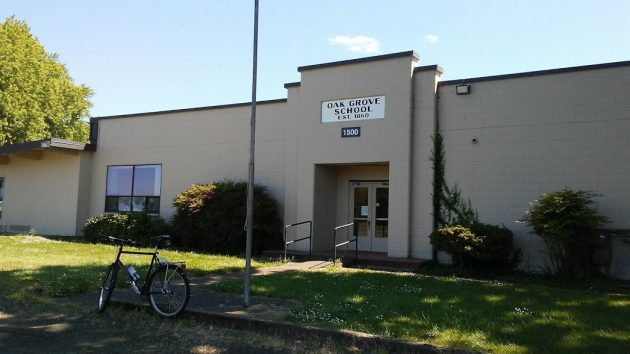 This hasn’t been the front door of Oak Grove School for a long time.

If you want to take a last look at Oak Grove School in rural North Albany, better make it quick. The building will be demolished shortly, to be replaced by a much bigger one that’s scheduled to be ready in the fall of 2019.

It is one element in the Albany school district’s $187 million capital construction program now under way. (Voters approved $159 million in bonds in May 2017. The state added a $6.9 million grant, and the bond sale yielded an additional $28.5 million.) (*This doesn’t add up. See the explanation in the comments below.)

The elementary school at 1500 Oak Grove Drive N.W. has been around since 1860, and the current building dates from 1948. Russ Allen, business director for Greater Albany Public Schools, told me that additions or other improvements were made in ’57, ’67, ’74, and again about 10 years ago. The original plan had been to remodel and enlarge Oak Grove again, but then the school board decided it was more economical and prudent to build a whole new school.

Gerding Builders of Corvallis, the low bidder, has been awarded the contract to oversee the Oak Grove replacement and has been getting bids from prospective contractors for different aspects of the work. Demolition and other site work are to start shortly after the last day of school, which is June 14. The board awarded a $2.16 million contract for that work last week.

The overall Oak Grove replacement project — classrooms, administrative offices, gym, cafeteria, parking for staff and visitors, everything — has been estimated to cost around $26 million.

The new school, with a two-story classroom wing, will have room for 400-500 pupils, compared to the current enrollment of about 290. You can look at the architects’ renderings on the school district website here.

On its 8.3-acre site, the present school tucks neatly into the surrounding farmland. We’ll see whether the larger, two-story replacement will manage the same when it’s done. (hh) 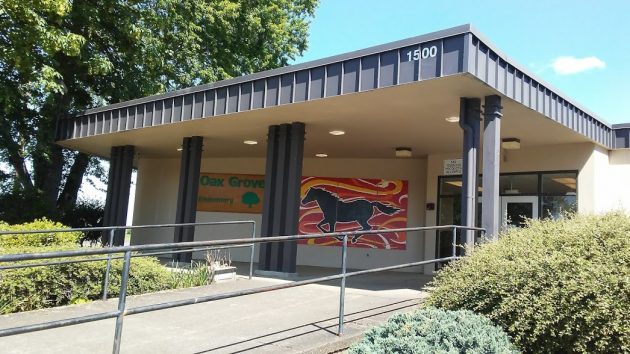 Like the rest of the buildings, this current main entrance will disappear.


13 responses to “Take a last look at Oak Grove School”