Written May 1st, 2017 by Hasso Hering
Comments: no responses.

The walking and bike paths connecting Albany Station to Swanson Park now are part of the Albany park system, and that means park rules against drinking and drug use, among other things, apply.

On April 26 the city council approved a request by the Albany police and the parks director to designate the “Swanson Park-Train Station Path as a city park.” The path is actually a system of two paths, one on each side of the Pacific Boulevard viaduct. Both were part of the project to renovate the train station and nearby underpass a dozen years ago. The path on the south side of the viaduct was completed in 2015, under an ODOT contract of about $384,000.

In the resolution that passed unanimously on Wednesday, the council said the city spends considerable resources to maintain the paths and the police “responds routinely to complaints of panhandling, camping, disorderly conduct, littering, drinking, drug use and related activities on and adjacent to this path system.” According to the resolution, extending the municipal code’s park regulations to the paths would help the police respond to these “undesirable activities.”

The people I saw along the path on Monday afternoon weren’t doing any of those things, as far as I could tell from the bike, riding past.

Ed Hodney, director of parks and recreation, told the council that signs designating the park would go up shortly. He estimated the signs would cost $1,500 total.

One idea behind the newer path was that during summers, it would allow people, especially children, from the south side to take the bus to Albany Station and then walk the short distance to the Swanson pool without having to cross the various streets under the underpass. With that in mind, you can see why the city wants to see that the path stays relatively clean and free of sketchy activities. (hh) 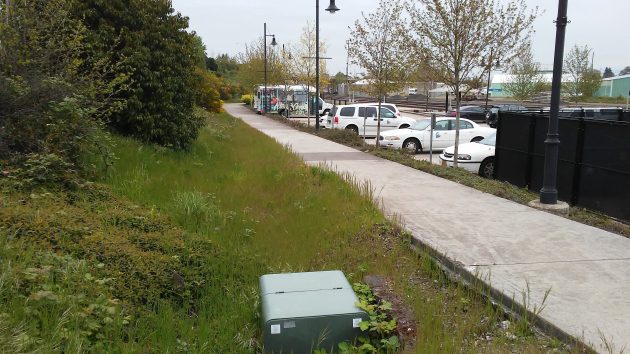 The newer path starts here, at Albany Station and leads under the viaduct in the distance. 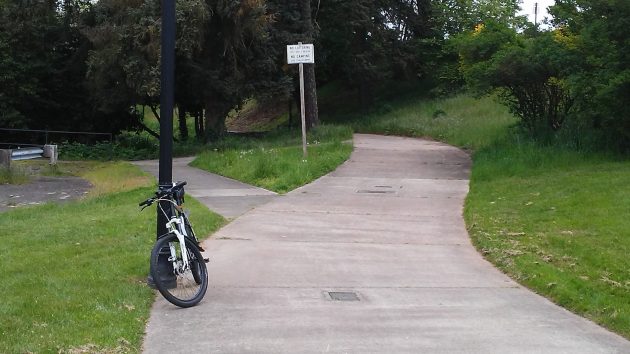 On the north side, the Swanson path starts near Lyon Street.