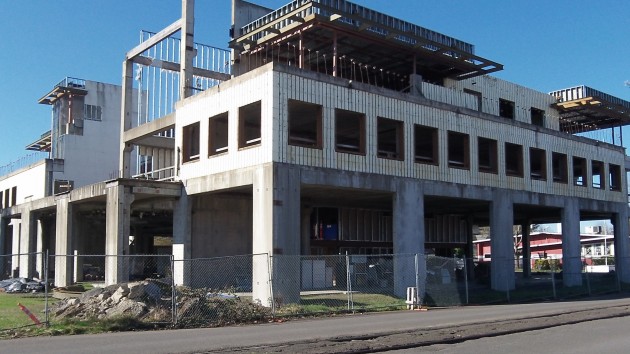 How the “one-of-a-kind, healthy building of the future” looked on Saturday in Independence.

Every time I pass through Independence, which is not that often, I am struck by the sight of the concrete skeleton of a three-story building right in the middle of town. It is, as I discovered on the city of Independence’s website and elsewhere on the Internet, a sad reminder of where dreams of “sustainability” can lead.

Symbolically named Independence Station, the project began about 10 years ago, the plan of a developer who wanted to build a showcase of sustainability, heated and cooled by solar energy, powered by biofuels, and aiming for the world’s highest score in the Leadership in Energy and Environmental Design.

In an interview with National Real Estate Investor, developer Steven Ribeiro said in 2006 that the building, which would have shops and offices as well as 15 apartments selling for $250,000 and up, was about 35 percent complete. In the summer the place would be powered by 130 kilowatts of solar power. For winters, he envisioned generators powered by cooking oil donated by local restaurants. To supplement that energy source, he was counting on sunflower oil and was looking for someone to grow 200 acres of sunflowers.

In June 2008, the law firm Stoel Rives, noting its expertise in matters including green building and renewable energy, announced it had helped arrange a $14.5 million financing deal for what it called “the greenest building in the world.”

In February 2012, the Polk County Itemizer Observer reported on efforts to settle a lawsuit in federal court in Los Angeles. The contractor on Independence Station had sued the developer and 20 others, alleging they had defaulted on a $14.5 million loan.

In March 2013, Independence City Manager David Clyne reported that the city had reached an agreement with the owner of Independence Station, the Granada Trust, over a debt to the city. (This seems to have been systems development charges.) The deal was that the city would not foreclose on the debt if work on the project was restarted within12 months. (See below for an update from Clyne.)

Independence Station has a nice-looking website, which says, “Aldeia LLC is proud to present its award-winning flagship project… Independence Station is an extraordinary, ultra-high performance, energy efficient, 57,000 square foot , mixed use medical facility that is powered primarily by the sun and the austere use of clean-burning North American natural gas.” (No more mention of cooking oil and sunflowers.) “Selected health and fitness related businesses will have the unique opportunity to experience this one-of-a-kind, healthy building of the future. Sign up early here …”

The site has a helpful link to project updates. The latest one is from July 2013: “The Independence Station team is proud to announce several new retailers are presently in final negotiations for inclusion in Independence Station… Stay tuned for a major announcement in the coming weeks.”

A few years ago, the town of Independence dressed up its main street and built a beautiful park along the Willamette River complete with an amphitheater and an impressive fountain on the side facing town. A few blocks away, though, Independence Station looks like an unfinished relic from another time. (hh) 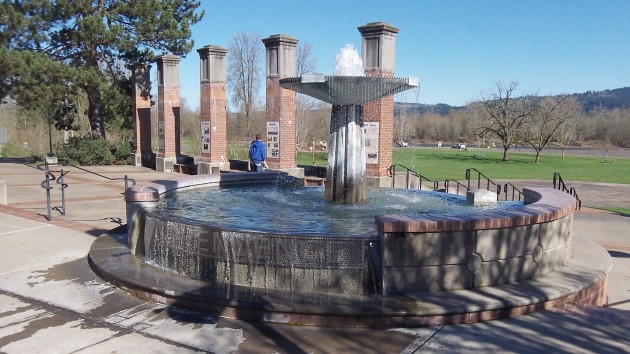 Also in Independence: A nice fountain and expansive riverside park.

Late Saturday I asked City Manager David Clyne for an update. Even though it was after hours on a weekend, he responded right away:
“Thank you for your inquiry. I wish our news relative to the Independence Station were better. The City pursued its foreclosure action relative to unpaid development fees with the end result that we received some $600,000 just days before the scheduled sheriff’s sale. While we were certainly pleased to receive payment, the end result is that we lost any last vestige of control of the half-completed building.
“The owner, Steven Ribeiro, was able to secure private financing to extend his ownership of the facility and pay off the City’s debt. We understand that the financing is only good for some 18 months more before the risk of losing the property matures again.
“Like our public, we are very frustrated with the lack of action on this building and would love to either see it completed or demolished. It stands as a monument to the Great Recession, one that we could certainly live without and one that is totally at odds with the great turnaround that we are experiencing in our local economy.
“At the same time that this building remains fallow, we are seeing the near completion of phase I of an $18 million high density residential (208 units, club house, convenience store and laundromat) project with the second and final phase scheduled for completion this summer.
“The City has just completed the purchase of a 20-acre riverside parcel (formerly the Valley Concrete Site) for redevelopment with projected high end lodging and related residential/commercial. We are seeing renovation of historic storefronts downtown, expansion and creation of new industrial space, and new subdivisions. We have not seen development of this magnitude in over a decade.
“But then there is . . . Independence Station.”
Posted in: Commentary
Tags: energy independence, green building, Independence Station, LEED, sustainability

One response to “Sustainability stalls in Independence”