Surpised by police presence on a quiet corner 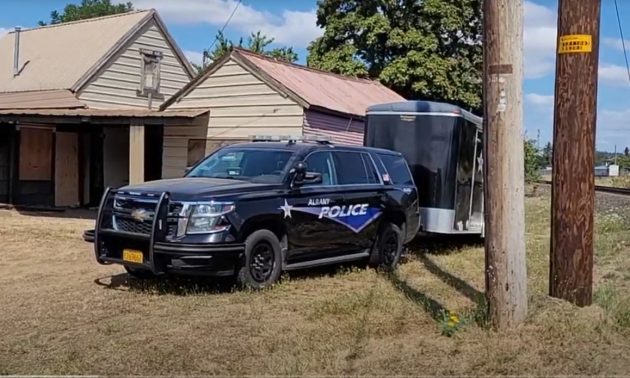 At the corner of Northeast First Avenue and Columbus Street in Albany on Wednesday afternoon.

Bike rides often take me into the old Willamette Neighborhood, which normally is quiet without much traffic. So I was surprised Wednesday to come across a fleet of city police and sheriff’s vehicles parked around one corner.

A sign quickly explained the situation. “Police training,” it said.

Albany police and the Benton County sheriff’s office were among the agencies taking part in this exercise, which evidently took place mostly inside the little house at First Avenue and Columbus Street N.E.

I’ve inquired with the Albany police about the nature of this training. Laura Hawkins, the department’s public information officer, replied that it was the Linn County Regional SWAT that was training at that location yesterday.

“The house was boarded up a couple years ago as a derelict structure. The homeowner gave permission for SWAT to do some training including breaching doors inside as long as they boarded it up again afterward,” Hawkins said. “We notified neighbors of the training and of course put the sign up as well. ”

The house, at 105 Columbus St. N.E., is next to the railroad track owned by the Burlington Northern and used by the Portland & Western.

The house has been vacant since 2018, when the city compliance officer closed it as uninhabitable after arranging for the elderly tenant to move to a different place.

The property is owned by a couple living in southeast Albany. Taxes on the property (about $1,200 in 2021)  have been paid every year even though nobody has been living there.

Good to know that the place is getting at least some use. (hh)


One response to “Surpised by police presence on a quiet corner”