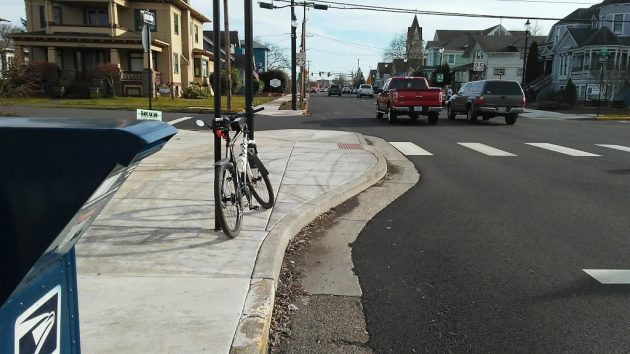 The bulb-out at Ellsworth and Seventh is easy to see when you’re standing up, less so from the driver’s seat of a low-slung car.

A citizen last month asked the Albany City Council to make one of the new Ellsworth Street bulb-outs easier for people in cars to see. So far though, nothing’s been done.

The sidewalk extension at issue is on the left side of Ellsworth at Seventh Avenue, a few feet away from a Postal Service drop box. That and other bulb-outs were added to the downtown Highway 20 couplet last year as part of the city’s streetscape beautification project.

Tom Cordier, a resident of North Albany, brought up the subject at the city council’s work session on Feb. 25. He said it became personal for him when his wife, who is less then 5 feet tall, hit the bulb-out curb when she intended to pull back into traffic after dropping off some mail. She was not the first to do so, as suggested by tire markings on the side of the curb.

Cordier’s suggestion: Install some high-viz markers — those thin plastic cylinders about 2 or or 3 feet tall — on the curb so drivers are reminded of the bulb-out even though they can’t see the curb itself. This has been done elsewhere in Albany locations where curbs or traffic islands stick out, such as at the Ninth Avenue entrance to Lowe’s.

Another option might be to move the mailbox, though a driveway on that block (outside the rear of the Democrat-Herald building) may make that impossible or imprudent.

A block down the street, there’s another place where replaceable plastic cones like this would be worth installing. That’s the lane restriction on Ellsworth ahead of the Ninth Avenue signal. Drivers in the left lane now are supposed to veer to the left before making the turn on Ninth, but some ignore the solid white line and go straight, inviting collisions with vehicles drifting left from their right, as the new markings allow.

Cones on the solid line marking the lane would emphasize the point. You might not think it necessary. But then you haven’t been almost sideswiped by someone who then further emphasized his limitations as a driver by leaning on the horn. (hh) 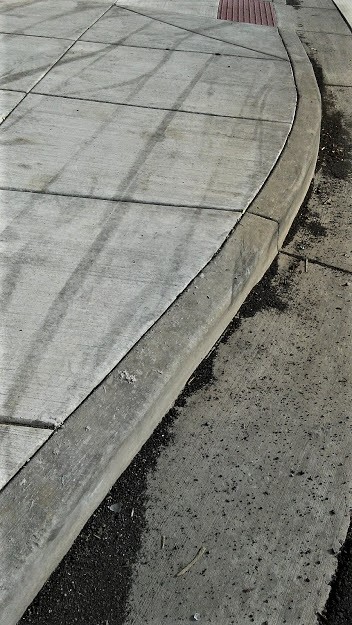 Tire marks are faintly visible on the side of the bulb-out’s curb.


9 responses to “Suggestion: Make this bulb-out easier to see”