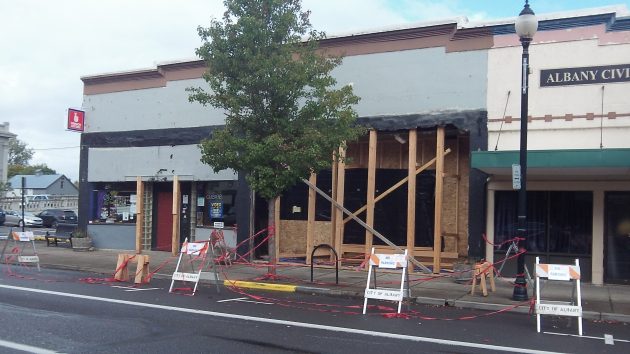 Looking at 129 First Ave. W. from across the street this morning.

This restaurant in downtown Albany is likely to stay closed until problems with its building are sorted out. The city building department has told the owner he has the choice of repairing the structure or tearing it down.

I hadn’t been aware there was a problem until my friend Jeff McMahon, the host of KGAL’s “Valley Talk,” asked me about it on the program Tuesday morning. He’s active in the Albany Civic Theater next door to the restaurant, the Espolon at 129 First Ave. W.

Back in Albany, I took a look at the closed business, snapped some photos of the open and shored-up facade, noticed the Sept. 22 “stop-work” order taped to the front, tried the number listed on the restaurant’s Facebook page, without luck, and finally checked with Albany Building Official Gary Stutzman for a rundown on what was going on.

“They were attempting to repair dry rot in the front of the building and not realizing how much damage or deterioration had taken place since it was constructed in the early 1900s, a portion of the front wall collapsed including a lot of the concrete,” he told me by email. “Much of the remaining concrete above and to the side of the hole is cracked and will need a structural engineer’s complete analysis of the issues to determine a long term fix.”

Last week, Stutzman went on, the Building Division hired a structural engineer to determine whether it’s “structurally safe to even be in the building or on the sidewalk and parking spaces. With the shoring up that has been done we feel the immediate danger has passed. They are intending to board up the hole to keep people from breaking in. The owner has been contacted and given a Notice and Order to basically repair or remove the structure.”

The building, at 129 First Ave. W., may not look like it, but Stutzman says it’s a historic structure. Another complication is that the eastern one-third is owned by the Albany Civic Theater. “Thus both owners could ultimately be affected. At best, it could take several months for the structural and historic aspects to be figured out, and then the owner still has the option of whether or how he wishes to proceed.”

I wondered about the safety of the theater next door. Stutzman reassured me: “The theater is considered safe to occupy. Some time over the last 100 years someone installed metal columns and beams at the front of their section. If the building were to be ultimately demolished it’ll take a structural engineer to determine how to save their section.”

A few weeks ago someone told me about the excellent tacos available at the Espolon. I wanted to check it out, but now it looks like that will have to wait. (hh) 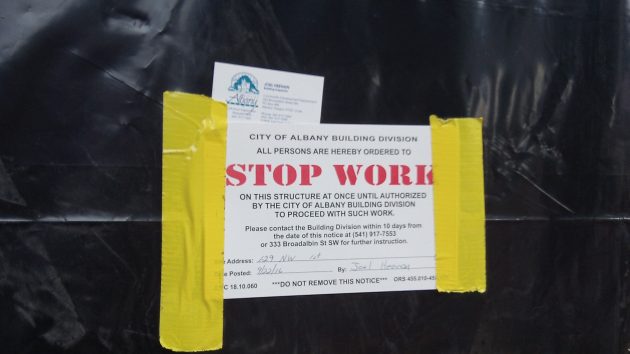 The notice taped to the front of the closed restaurant.