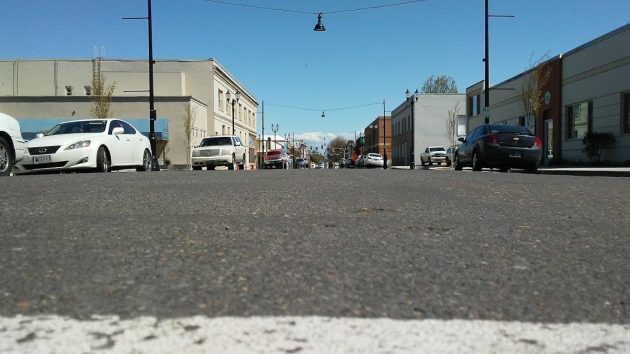 Third Avenue from Ferry looking east: The crown of the street will be flattened in the reconstruction.

Albany’s urban renewal board had three options for repaving seven blocks of two downtown streets. It chose the one that would take longer and cost more than the others because it should result in stronger pavement and less maintenance through the years.

The full reconstruction covers four blocks of Second Avenue, from Washington to Lyon Street, and three on Third, from Ferry to Lyon. It is scheduled as soon as the weather allows.

On Wednesday, the advisory board of the Central Albany Revitalization Area was given three options for fixing those streets, among the last elements of the city’s downtown streetscape enhancement program.

The board unanimously chose Option 3, which will add $444,000 to the cost of the original streetscape contract of $7,637,700, according to City Engineer Staci Belcastro and Lori Schumacher, also an engineer in public works.

This option calls for excavating the streets and rebuilding them with seven inches of asphalt over 12 inches of rock, the current city standard for major streets, resulting in a pavement life of more than 20 years. The work also will eliminate the steep crowns in those blocks.

The engineers estimate it will take 40 working days to accomplish this.

The other options were to do a less complete reconstruction. The cheapest, at no additional cost, would grind down three inches of the pavement and replace it with a layer of asphalt. But the engineers said cracks and trench cuts in the underlying pavement would likely reappear in as little as five years. The second option, at an additional cost of $229,000, was to do a reconstruction with less rock and a thinner layer of asphalt than Option 3.

Councilman Rich Kellum was concerned about the harm the additional disruption of having the streets torn up would do to businesses downtown.

The work on Second and Third won’t be the last disruption. ODOT plans to repave the downtown segments of Highway 20 — Ellsworth and Lyon — later in the summer. (hh)