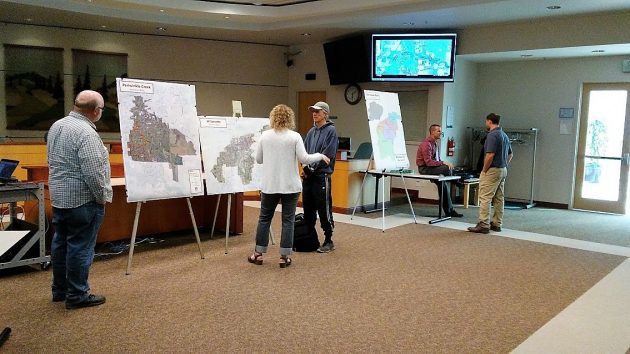 Maps and a computer animation on the video screen at Tuesday’s open house illustrate Albany’s storm water system and its shortcomings.

If you live in Albany and any heavy downpour regularly floods your street, you should tell the city engineers about it. And Thursday you have another chance to do just that.

Albany is preparing to update its master plan for handling rain water as the city continues to grow in population. The last plan dates from 1988, and the one for North Albany is older still.

Tuesday night there was a public open house to let people see maps of where in town storm water occasionally causes problems. There were detailed maps for each of the city’s drainage basins showing where storm drains were either absent or likely to be overloaded in heavy storms.

A handful of people showed up, outnumbered by public works employees ready to explain the maps. An open house about storm sewers does not get many people excited, it would appear.

But from 5:30 to 7 p.m. Thursday (May 3), there’s another open house, also in the council chamber at City Hall. And what the city wants to know is whether in all the mapping, it might have missed a spot where rain water does not readily drain away. So if your neighborhood has problems with flooded streets, get down there Thursday and tell them about it.

The city put it this way: “Feedback will be used to amend existing system deficiencies before taking the next steps to evaluate the storm water system’s ability to serve growth.”

The Albany council imposed a monthly storm water utility fee that took effect a year ago, and it raised the amount of the charge this year. The money is intended to help pay for maintaining and improving the drainage system, and also to help bear the cost of administering a new state storm water discharge permit likely to take effect later this year.

Once the city and its consultant figure out how and where the drainage system should be improved and which projects to include in the new master plan, it has promised more open houses. You can’t wait, right? (hh) 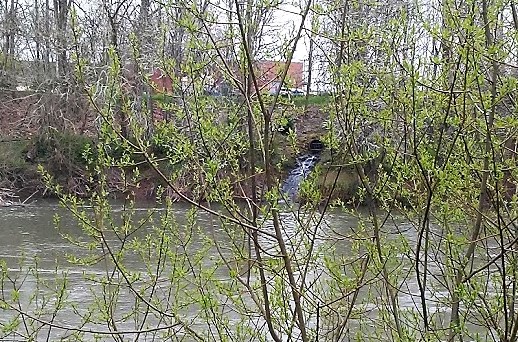 A city storm drain empties into the Calapooia River opposite Bryant Park. The photo was taken April 18.