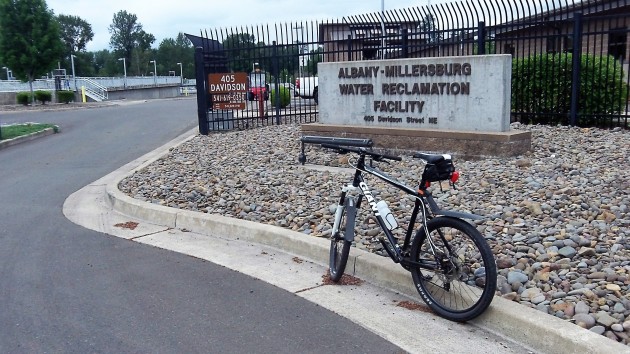 It’s didn’t smell bad the afternoon I stopped by the plant last week.

Residents downwind from the Albany-Millersburg Water Reclamation Facility — you can call it the Albany sewage treatment plant if you want — apparently will have to put up with the continued failure of one aspect of the $70 million plant for quite another while.

The problem is that a system to reduce the amount of solid residue from the treatment process has not worked as intended since the expanded plant was finished in 2009. This has forced the operation to store the material and periodically send it off to the Coffin Butte landfill, with the unfortunate side effect that the plant, at times, gives off more of a stink than you might expect.

“Now, they haul it off more regularly, but the odor is super concentrated several (2-4) nights per week,” writes Pausha Hart, who lives directly across from the plant on Willamette Avenue. She moved there in 2005, before the plant was expanded. Now, she says, “Forget about going outside, the stench is terrible. I keep several candles on hand. With summer approaching, I am pretty concerned … .”

Her email to me was prompted by a recent story on hh-today about the city council asking about an odor issue at the Coffin Butte composting center on Camp Adair Road. Her message: What about our problem?

The bike route on my riverfront beat takes me past the treatment plant at least once a week, and I have not noticed the stink lately. Hart reports the problem occurs at night. When I talked to her last week, she said she had kept track and counted 12 nights since April 28 that the odor had been bad.

In August 2012, the city of Albany achieved a settlement under which Siemens, the maker of the system at issue, would pay the city $4.75 million. After attorney fees, the city got about $4.4 million. Chris Bailey, the director of Public Works Operations, says that to date the city has spent $316,000 on “projects to define the preferred solids treatment process,” with some of that money coming from sewer rates. To finish the search for a solution, another $500,000 is budgeted in the fiscal year that starts July 1, 2016. Some $3,753,000.remains in reserve from the settlement, presumably to pay for whatever solution is agreed upon.

A pilot program to test one potential treatment was conducted this fiscal year. But as of now, Bailey tells me in an email, “We don’t have a planned solution yet. We have a consultant who is helping us work through a limited number of options to decide what we will recommend to the city council. That work should be finished this fall.”

So how long must the plant’s neighbors endure?

Once the engineers figure something out and the council approves, Bailey says, “it will be many months to implement that solution.” First there’s the design phase, followed by construction and then the start-up. “It is too early now to say exactly how long that will take.”

All this the layman — meaning me — finds hard to understand. There are thousands of municipal sewage treatment plants all over the United States, and all of them deal with the disposal of solids. How do they manage, and why don’t we do what they do?

The city council in June will act on a 3 percent increase in Albany sewer rates. That would be a good time for members to ask — and then explain — just why after more than six years, we still don’t know how  this problem can be fixed. (hh)