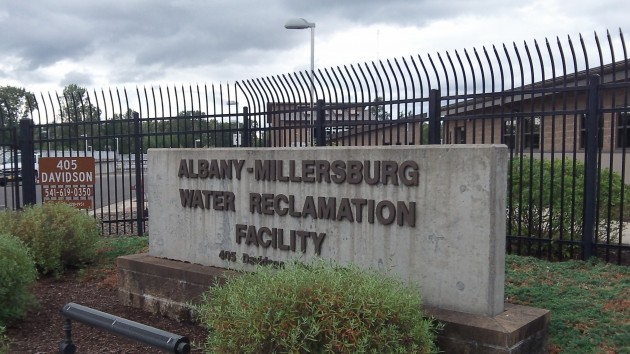 The entrance to the plant, where engineers are hoping for a $5 million solution.

Albany just can’t seem to catch a break with the problem of solid waste at the joint Albany-Millersburg sewage treatment plant. As the weather warmed this spring, on bike rides past the plant and downwind from it, I once again noticed the outhouse odor that caused neighbors to petition the Albany City Council for a solution in 2012. An affordable solution is not yet in sight.

The problem started shortly after the $70 million plant expansion was completed in 2009. A component or system intended to reduce the amount of solids did not work as expected, causing a buildup of this sludge and the need to dispose of it.

In August 2012, the city of Albany reached a settlement with Siemens, the manufacturer of the so-called “Cannibal” system, for $4.75 million. About that time the city also started paying to have the solid sludge hauled to the Coffin Butte landfill frequently in order to reduce the odor wafting over the neighborhood. The following year Albany paid CH2M Hill, the engineering firm that had designed the treatment plant rebuild, $80,000 for its help in reaching the settlement.

The issue was alluded to briefly when the Albany council this week raised sewer rates 8 percent starting July 1. Public Works Director Mark Shepard, without directly referring to the sludge, said higher-than-expected operating costs at the treatment plant were among the factors in the rate setting.

Afterward I asked Shepard by email for an update on the solids problem. His reply: “The City is still having the sludge hauled to the landfill.”

Of the $4.75 million Siemens settlement, he said: “After paying attorneys and CH2M Hill, we had a balance of a little over $4 million. During our settlement efforts with Siemens, CH2M estimated that the cost to construct a solution to deal with the sludge was about $5 million. After the settlement with Siemens, we worked with CH2M to complete a pre-design effort to identify and estimate costs for a solution. The cost estimates CH2M came back with were in excess of $10 million.”

Wow! So now what? Shepard again: “We are planning on doing a pilot test on a potential solution that might be able to be constructed closer to the $5 million target.”

One response to “Still struggling with stinky sludge”