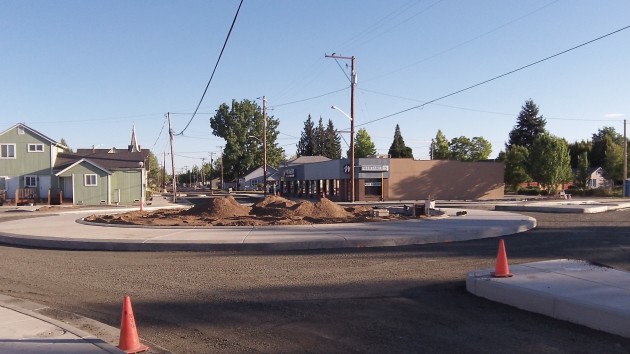 Main Street circle: It looks nice and round.

In a couple of weeks Albany will have its third roundabout or traffic circle, so it’s time for a refresher on how to drive through one.  One bit of advice: Don’t stop unless you have to. 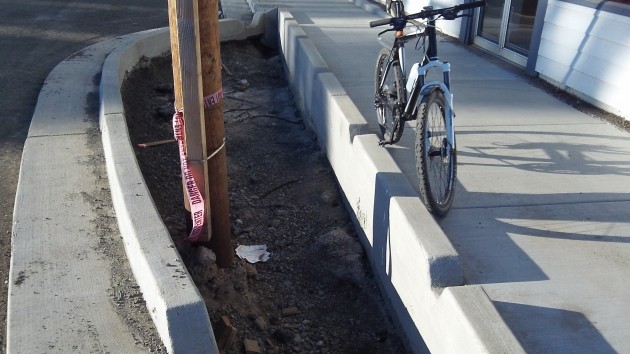 One of the deep runoff swales we’ve heard so much about. Let’s hope no one falls in.

This point is lost on some drivers. They see somebody approaching the roundabout from the left, they figure they better stop. Somebody behind them, more attuned to the guiding principle of roundabouts, may not expect them to stop. And that’s how rear-end collisions happen.

Pedestrians in crosswalks have the right of way at roundabouts just like at other intersections. That’s why occasionally traffic inside the roundabout does have to come to a halt in order to let somebody in front leave the circle. The unfortunate effect is like that of one guy in a revolving door stopping and making all those behind him bumping into each other. Pedestrians might want to keep that in mind and not step off the curb of a roundabout unless no traffic is coming round the bend.

Bicyclists, by the way, are advised to merge into the traffic lane in roundabouts. If you see any, my advice is don’t run them down.

The Oregon manual wants drivers to signal a right-hand turn before leaving the roundabout. That has proved a problem now and then on the very small roundabout on North Albany Road. You can’t always get the right-side blinker to work when your wheel is cranked way over to the left, which it must be to get around the circle.

The whole idea of roundabouts is to keep traffic moving without stopping. It works when we follow the rules and common sense.

On Main, the construction area of the $1.8 million roundabout there will be closed to traffic starting Thursday. It will stay closed until the paving is finished eight days later, on Aug. 29. By that time, let’s hope all drivers on that route will know what to do. (hh)


One response to “Still puzzled by roundabouts?”