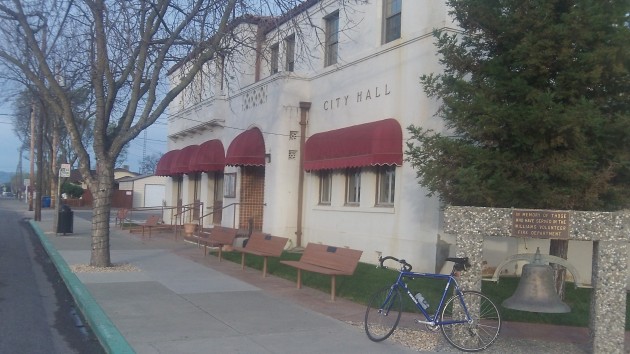 The handsome city hall of Williams, CA, on Sunday morning.

The Williams council held a special meeting on Feb. 18 to hear a presentation on the Jefferson project, and according to its agenda it may be about to follow through. (You learn this kind of stuff when, while stopping in a town, you look up its website and check what the city government is up to.)

Williams’ quixotic declaration tilts at the windmills of the political establishment in Sacramento, in the same way that Oregon’s rural counties’ lodge hopeless complaints against the policies imposed by the Portland-Corvallis-Eugene axis. Lately, though, at least five northern California counties have filed petitions in Sacramento stating their desire to leave the state and form a new one. Siskiyou and Modoc were the first, last year, and in January Tulare, Glenn and Yuba joined them. Others that have been mentioned as possible candidates are Del Norte, Humboldt, Trinity and Shasta in California, along with Lake, Klamath, Jackson, Josephine, Douglas, Coos and Curry counties in Oregon.

In January, the Sacramento Bee said a freshman assemblyman, Republican James Gallagher of Yuba City, talked with the Jefferson proponents. He said one way to give rural counties more clout in state capitals is to elect one senator per county, a system that California had until the Supreme Court ended it with its one-man, one-vote decision in the 1960s.

That arrangement, one senator per county while the lower house is apportioned by population, would be very helpful today, in California as well as in Oregon. The liberal slant of the heavily Democratic urban centers would be balanced by the conservative leanings of the rest of these two states, where agriculture and resource industries play such a vital role. If rural areas still had a way to make their voices count, and to protect their interests, people in places like northern California and southern Oregon could quit thinking about forming a new state of their own. (hh) 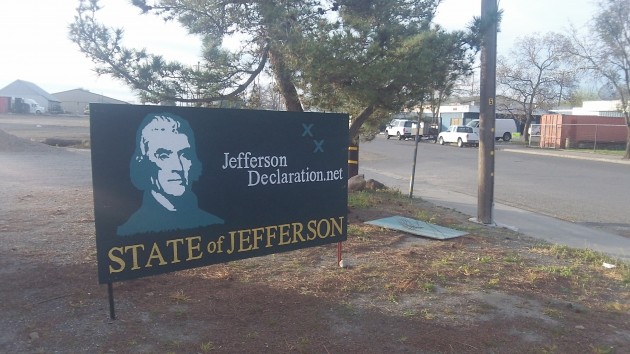 A street-corner banner in Williams.