Stay out of city court: Here’s why 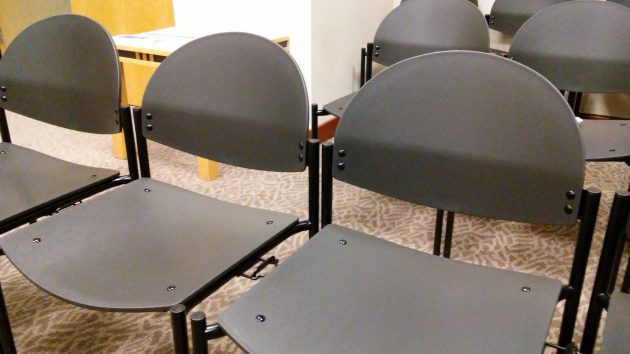 Here you see yet another reason — in addition to the countless others — that makes it wise to avoid having to sit in Albany Municipal Court: New and uncomfortable seats.

The thinly upholstered chairs in the city courtroom were replaced in time for the start of the new year. The replacements are plastic, and they are hard. I first saw them and sat on one when the city council held its first work session of 2017 on Jan. 9. (Presumably to encourage a more informal atmosphere, most of the council’s work sessions are held in the courtroom rather than the council chambers.)

As I understood from Wes Hare, the city manager, the old chairs were pretty worn, apparently, and they weren’t all that easy to keep clean. There might have been an occasional issue with aroma. The new ones present no such complications. They look like they’re easy to wipe off.

Unfortunately, they are also designed so that you have to sit up straight lest you slide off. No napping in these chairs. So they may, in fact, be ideal for a court. Get in and get out quick. Keep the proceedings short. (Not a bad goal for council debates either, come to think of it.)

Better yet, of course: Don’t speed, keep mounds of trash outside your house, or violate the municipal code in any of the other ways that might land you in the city court. (hh)


4 responses to “Stay out of city court: Here’s why”