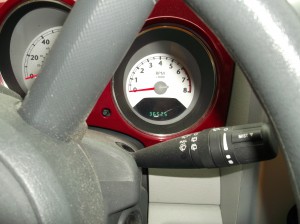 Just like an old-fashioned odometer, the gizmo would track miles driven, but only on Oregon public roads.

No, Senator Merkley, the concept of an Oregon vehicle mileage tax does not require people to disclose where they are going. It requires only that the in-state mileage on public roads be recorded. That’s so the owners can pay a road user fee instead of the gas tax.

Jeff Merkley, Oregon’s junior member in the U.S. Senate, held a town hall meeting in Corvallis the other day, on Jan. 12. Someone evidently asked him what he thought of the Oregon proposal for a road user fee for vehicles that get very high mileage. Since these vehicles use no or very little gas, their owners now don’t pay a proportionate share of the cost of maintaining roads the way regular fuel buyers do. During this coming session the legislature will get a bill authorizing ODOT to start a road-user fee program by 2015.

According to a sketchy account of the Merkley town hall meting in the local Sunday paper, the senator said he would not support such a program if, in the words of the reporter, “it means people have to disclose where they are going to and from.” This idea that the state might track where people go has been a common fear about the program. But the fear is misplaced. If vehicle owners choose the electronic mileage measurement option, the technology would record how many miles they drive on Oregon roads, but not where and when.

Besides which, people can already be tracked if they use cell phones, as we have learned over the years from various news stories about searches for people who get lost. The public does not seem to be worried about tracking of cell phones. So why worry about a system which, very much like the common odometer that each vehicle has, just measures how far the car goes? (hh)