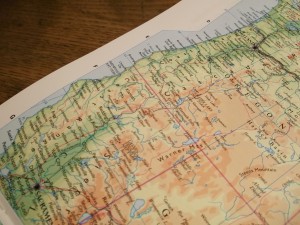 Maybe some of this could one day be the state of Jefferson.

Puerto Rico has narrowly voted to apply to become a U.S. state, a request that now will go to Congress for a decision. Judging by a report in The Week magazine, the majority was at least partially motivated by the prospect of more federal aid, not exactly a big surprise. But if we are going to have a 51st state, maybe Congress could order some other changes that would keep us at 50 — and the Senate membership at an easily remembered 100,One possibility: Combine a couple of those little bitty states in the Northeast, hardly bigger than some western counties, to make one state out of two. Connecticut, for example, should really be combined with Massachusetts. And why do New Hampshire and Vermont have to be two states instead of one? Delaware is so tiny as to be a joke, which may explain Joe Biden. Combine it with Maryland, at least.

If we did all three of those, we would have room to make some adjustments of boundaries in the West as well and still remain at 50 states. California is really too big to be one state. It should be two. And if there was a way to put both San Francisco and Los Angeles in the same half, the other half would have a better chance of forming a government that works.

And how about letting Eastern Oregon join Idaho, giving that region a better economy because it would be out from under the yoke of policies and laws made by the Portland-Eugene axis. If not that, how about forming the state of Jefferson by joining the southern tier of Oregon counties with an area from, say, Red Bluff north?

Once you start playing with state boundaries, as you can see, it’s tempting to come up with all kinds of possible changes that might work out for the common good. (hh)

Comment from Mike Reynolds:  “I would imagine many in northern California would love to join with Oregon, or at least Eastern Oregon. I would only like that if Linn County could join them. :) I have wondered why so many states in the NE are so small. It would make sense to combine a few, especially since the political dynamics wouldn’t change.”