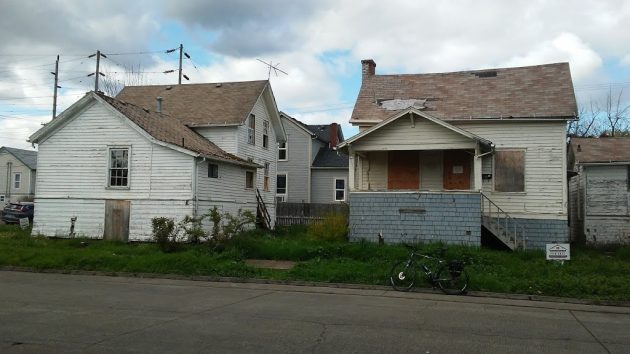 Two of the three bones of contention: The old houses on Friday afternoon.

What happens now, now that LUBA has faulted the Albany City Council for how it decided to allow the planned demolition of three old houses? The main upshot seems to be that the houses, at Fourth and Calapooia, are not likely to be demolished any time soon.

The Oregon Land Use Board of Appeals, in a decision filed Thursday, “remanded” or sent the case back to the city for, presumably, additional proceedings.

LUBA said the Albany council failed to adopt findings to support its decision, which was to allow the demolition after 90 days. The state board also said Councilman Rich Kellum was biased on the side of demolition, citing a comment he had submitted to hh-today.

The council voted 4-2 on Oct. 10 to allow the houses to be taken down after 90 days. Albany resident Bernadette Niederer, a former official of the Monteith Historical Society, appealed that decision to LUBA.

The council acted after the Landmarks Advisory Commission, in September, had stayed until this coming July 9, or 365 days after the application was filed.  The Albany code says that this was all the Landmarks board was allowed to do, rather than denying it altogether.

LUBA, though, said Albany’s code fails to comply with a state administrative rule, which does indeed allow for the complete denial of a request to demolish a “contributing” historic landmark unless certain conditions are met.

The houses have suffered from decades of neglect and abuse. The city boarded them up and evicted the occupants in 2017. Albany homebuilders Mark and Tina Siegner bought the single tax lot containing the three structures from the Signs of Victory Mission in February 2018. After they determined the houses could not be economically restored, they sought city permission to clear the lot so they could build new housing that blends with the historic neighborhood, as they’ve done elsewhere in old Albany.

Since the council action in October, the houses have been for sale to anyone who would move them. On Friday the for-sale signs were still up. (hh)