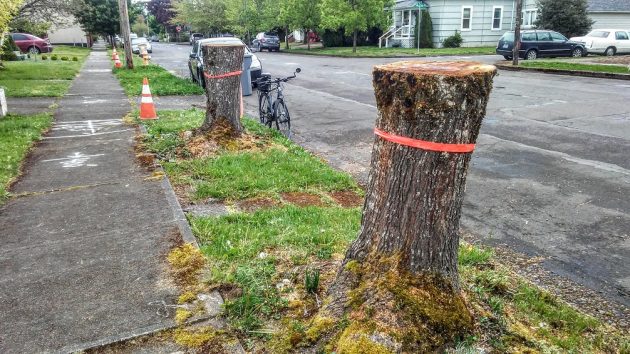 Stumps of street trees near the west end of Ninth Avenue on Friday.

They picked the week after Arbor Day to cut down more than a dozen street trees along Albany’s Ninth Avenue west of Elm Street. This spring or summer the street and sidewalks are going to be rebuilt.

It may not look like it from the pictures I took Friday, but for a quarter of a century Albany has won recognition for its management of trees. In her proclamation of April 24 as Arbor Day, Mayor Sharon Konopa pointed out that for the last 25 consecutive years, the National Arbor Day Foundation has recognized Albany’s stewardship of its urban forest by naming it a “Tree City USA.”

Sometimes stewardship means cutting trees down, especially when they cause trouble with sidewalks, and then planting new ones.

On Friday, I counted 17 stumps along Ninth between Elm Street and Lawnridge, most of them kind of thin and spindly, but also including three or four big ones.

In its winning bid of $1,387,485 for the street reconstruction contract, K&E Excavating of Salem included $30,700 for planting street trees and getting them established. (The tree removal was handled by somebody else.)

The contract doesn’t say how many trees are to be planted. But in any case, it will be a while before the replacements are as big as some of the ones cut down. (hh)

Today, May 5, City Engineer Staci Belcastro provided these additional details: “Just over 20 street trees have been removed on Ninth Avenue between Broadway Street and Elm Street in advance of the Ninth Avenue Street improvements project. … Construction is expected to begin this month.The project includes street reconstruction, a new water line, storm drain improvements, stormwater treatment swales, curb and gutter, and replacement of sidewalk and driveway approaches as required. Additionally, approximately 31 new street trees will be planted no later than November 15, 2020. 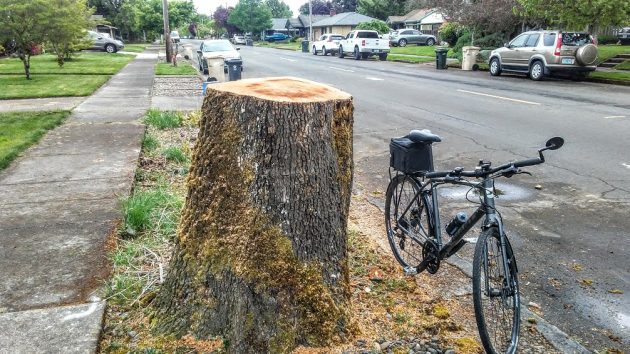 Looking east on Ninth near Lawnridge.


6 responses to “Starting a street rebuild in Tree City USA”