Marc Manley and Bill Ryals explain their ideas for the old St. Francis Hotel before the CARA board Wednesday.

It will take a few years and millions of dollars, but if things happen as intended, the former St. Francis Hotel and adjacent Rhodes Building in Albany will become a downtown showplace once again.

The city urban renewal agency has an option to buy the property for $650,000. On Wednesday the council, acting as the Albany Revitalization Agency or ARA, agreed to an offer by developer Marc Manley to buy it for $700,000 subject to the terms of a development agreement that’s to be negotiated over the next four months.

Once the agreement is reached and signed, the city will exercise its option and immediately complete the sale to Manley’s company, MMVentures.

Manley and his wife, Anni, redeveloped the historic Flinn Block and adjacent Ames Building on First Avenue over several years starting in 2005 to house restaurants, retail shops and an upstairs event center or ballroom.

Manley and Albany architect Bill Ryals outlined their plans for the separate but connected St. Francis and Rhodes buildings at Ferry Street and First Avenue before the advisory board of the Central Albany Revitalization Area, the city’s urban renewal district.

There are no details yet. But the concept is to restore the St. Francis’s tall ground floor windows and restore that floor as retail, restaurant and “co-working” space. On the upper floors, now vacant, they envision two-bedroom apartments. Above that, perhaps a rooftop cafe.

In the Rhodes Building, which was part of the hotel in its day but has different levels and fewer floors, they are thinking of a bed and breakfast.

Why did the city take an option and then look for buyer and developer? Because the building had found no buyers when it was listed, CARA wants it to be redeveloped to contribute to the vitality of downtown, and CARA wants some control over how the redevelopment is done. That control is what the agreement will be negotiated to provide.

Manley’s approach is to rebuild the infrastructure to support full occupancy, but then to proceed in phases, ground floor first, then work upward. He can’t say how long this will take, but it may be a few years. As for estimates of the overall cost, all anybody would say was “millions.”

CARA will be asked for financial assistance under the urban renewal program as the project moves forward.

Manley and Ryals have thoroughly inspected the buildings. The back of the Rhodes section has issues, according to Ryals, but the rest of the complex is in surprisingly good shape.

The fate of the St. Francis, which was built around 1915, has been a topic since at least the 1970s as one after another of the other multistory structures in central Albany were pulled down.  Manley and Ryals say the goal now is to preserve its history while making the building ready for today and for the future.

On Wednesday, both the CARA board and then the council voted unanimously to let them try. (hh) 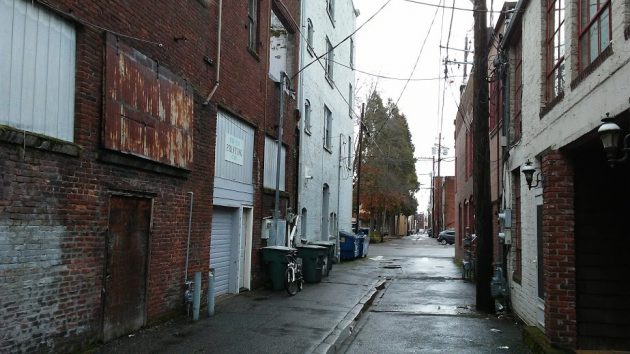 The alley behind the St. Francis on Feb.23, 2019. This space too is due for some restoration.