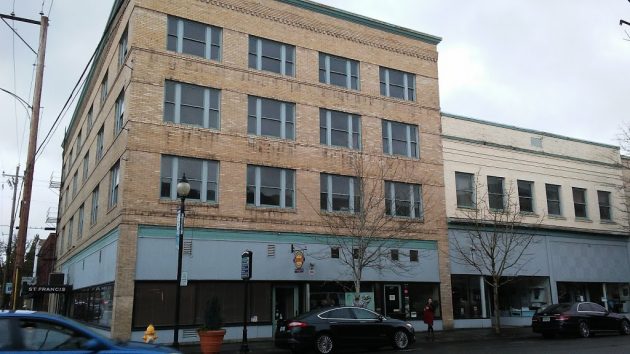 The St. Francis and two-story Rhodes Building next door in February 2019.

Several members of the Central Albany Revitalization Area advisory board want the urban renewal agency to give financial support to restoring the former St. Francis hotel and adjacent Rhodes building. But after Wednesday’s meeting of the board, just how much the agency would pay was still unclear.

For an hour and a half, developer Marc Manley went over the risks and barriers faced by his team’s proposal, including mainly the costs. But any actual request for CARA aid was put off till next month.

The idea is to redevelop the St. Francis and Rhodes building, which are one property, with retail spaces on the ground floor, about two dozen market-rate apartments upstairs, a “self-service hotel” in the Rhodes wing, and a restaurant on the roof of the St. Francis.

The problem is that doing all this would cost up to $11 million, while the value of the remodeled property would be only $3-4 million.

The city has an option to buy the property that runs out in July 2021 but can be renewed. The city got the option with the idea of recruiting someone to fix up the structures, a key location for reviving downtown.

Councilman Dick Olsen was most vocal in favoring CARA support of the redevelopment. He said CARA was founded to cure the kind of blight represented by the deteriorated hotel and the building next door. Councilors Bessie Johnson, Matilda Novak and Ray Kopczynski also spoke in favor.

According to city development manager Seth Sherry, CARA has money to support both the St. Francis project and redevelopment of the former Wells Fargo branch downtown. He mentioned $1-2 million each. The Wells Fargo project will be on the next CARA agenda for Feb. 17.

Architect Bill Ryals designed the St. Francis redevelopment. He has just been appointed to the CARA board but recused himself from Wednesday’s discussion except to explain something about the Rhodes building.

People have talked about restoring the St. Francis for decades. Whether the current plan is carried out is still too early to say. (hh)