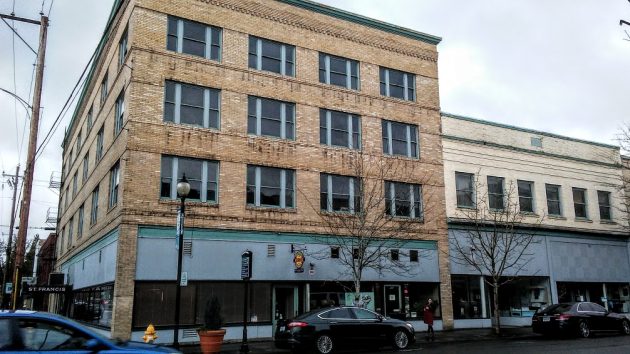 The former St. Francis Hotel as it looked in February this year.

First, Mayor Sharon Konopa said she was encouraged by several councilors’ comments in support of a contract to develop a design and buildable plans for redeveloping the Willamette riverfront. And whether the city spends money on that or the St. Francis or the former Wells Fargo branch downtown, she said, the same people would complain.

Then, a few minutes later, Councilor Bill Coburn asked economic development manager Seth Sherry whether, even though it was not an executive session closed to the public, he could say anything “on the topic of the St. Francis… Is there any update?”

“I don’t have anything to share in this forum,” Sherry replied. “Thanks for asking.”

The 15-minute ARA meeting took place Wednesday. You can listen to the audio here.

The St. Francis property, home of the Pride Printing Co. since the 1960s, has been for sale, according to the Albany Downtown Association. Neither the city council as the ARA, nor the advisory board of CARA has held any recent public discussion about it.

Following an executive session of the CARA board in June, though, the council/ARA voted to “direct the staff to execute an option to purchase a building within the CARA district.” That may have been the action, the substance of which is still confidential, on which Coburn wondered if there was anything new.

Councilor Rich Kellum then asked for an update on the Wells Fargo property, which the city bought from the bank for $1.5 million in February. Sherry said he would have one for the next CARA board and ARA meetings on Nov. 15.

In June, the ARA granted a six-month purchase option on the former bank property to BGW Partners, a team consisting of Buzz Wheeler, owner of the Albany-based Coastal Farm and Ranch Stores; Matt Bennett, co-owner and chef at Sybaris; Tom Gerding of Gerding Builders; and architect Bill Ryals.

The six months were intended to give the team time to negotiate a development agreement with the city. (hh)

11 responses to “St. Francis comes up at city meeting”