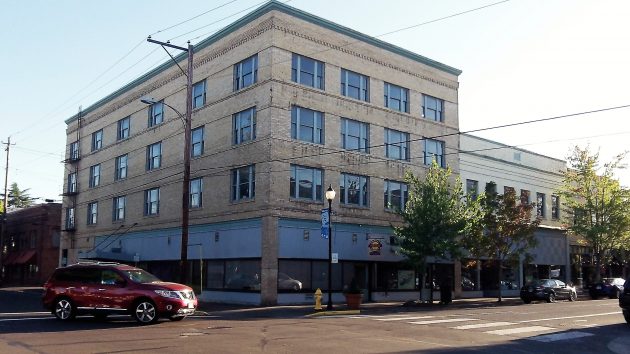 What are the chances of a successful hotel being developed in downtown Albany? Conventional wisdom says zero to none.  But maybe the conventional wisdom is wrong. And come winter, business students at the University of Oregon will try to answer the question in a systematic way.

The city of Albany has formed a partnership with the “Sustainable City Year” program at the U of O. The program calls for students and faculty in several disciplines — from architecture and business to geography and public policy planning and management — to tackle 21 problems or issues of interest to the city during fall, winter and spring terms.

One item on the list is titled “St. Francis Hotel: Viability of a hotel in downtown Albany.” The explanation reads: “This project will investigate the barriers, opportunities and feasibility for hotel development in downtown Albany, either with the existing St. Francis historic building, or with new construction sites.”

About a 103 years old now, the St. Francis building at First and Ferry is owned by the Pride Printing Co., which occupies the ground floor. The top three floors of the four story-building have been largely vacant since the 1960s. Every now and then, people who think about such things wish that the building could be restored, either as a hotel or something else that would bring more people downtown.

About 2010, Innovative Housing Inc. of Portland wanted help from the downtown urban renewal district to buy the building and renovate it for “workforce housing.” The city said no, and later the company instead got city and state help in building Woodwind Village, which replaced an old trailer park on the east side of the urban renewal district.

Two years ago a team of architects and historic preservation specialists looked at the St. Francis again. They concluded that the “most viable uses include commercial suites on the ground floors, with hotel and/or market rate housing on the upper floors.” They also estimated that fixing up the building would cost roughly $10 million or more.

It’s hard to imagine that somebody with tons of idle money lying around would want to spend it on the St. Francis. If you had that kind of money and wanted to have a hotel downtown, you’d more likely pick out a vacant lot or two and build a structure with a modern layout and efficiencies inside a historic-looking shell.

Saving the St. Francis and turning it from a relic into a living landmark in a thriving downtown would be a huge achievement. As far as I can see, only the Albany Revitalization Agency and its district (CARA) are in a position to consider doing so. To get started, CARA would have to acquire the building and then go from there.

Maybe the aspiring tycoons in the U of O business will come up with a better idea. I doubt it, but one can always hope. (hh)