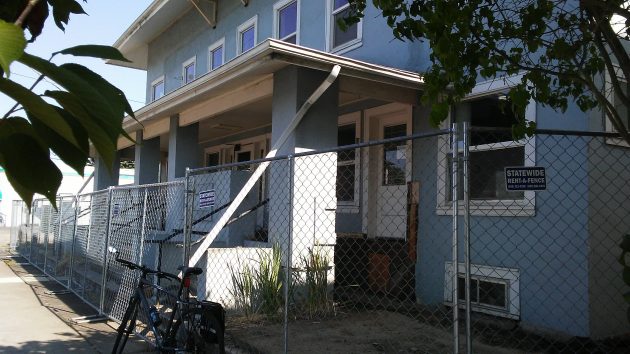 The front of the Spruce Apartments, shown Aug. 5, will look different when the renovation is complete.

The continuing renovation of the “Spruce Apartments” in downtown Albany has cleared a procedural hurdle with the approval by the city’s Landmarks Advisory Commission.

The commission acted Wednesday night after a public hearing and discussion that lasted about two hours. It unanimously approved some changes in the exterior appearance of the building, at 222 First Ave. S.E. The vote to approve the use of substitute materials was 4-2.

There was a prolonged discussion about replacing some wood windows in the attic with vinyl, which the board decided should be avoided. And two members objected to replacing the vinyl siding on the sides and back with smooth cement fiber lap siding. They wanted the old wood underneath to be reused instead, even though the applicant said it was damaged because the vinyl had been improperly installed on top of it.

(I listened to the meeting’s audio recording on the city’s website, which didn’t identify who voted which way.)

The building is owned by Glorietta Bay LLC, a Scott Lepman company. Among other things, Lepman intends to restore the two-story front porch, which a prior owner reduced to a single story some time after 1985. Other exterior changes also would make the structure look more like the original.

The building had been neglected for years, Lepman told the panel. Its restoration has been going on for a year or more. When it’s finished, it will have 18 apartments.

The building was constructed in 1922 on the site of an opera house that was designed by Charles Burggraf and built in 1905. According to the staff report before the Landmarks board, the opera house was demolished in 1921. Some of its materials are said to have been used in building the apartments. Because of the Albany housing shortage during World War II, the interior was remodeled to add units in 1943.

Unlike the last Lepman apartment restoration downtown, the Fortmiller Building on Third Avenue completed last year,  the Spruce project is getting no assistance from CARA, the downtown urban renewal district. Not so far, anyway. No request for CARA funding in regard to the building’s exterior has been made. (hh)