Springtime on Cox Creek (An update) 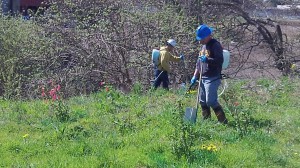 Springtime means maintenance work along the banks of Albany’s Cox Creek from Salem Avenue to the Willamette River. A crew working for R. Franco Restoration, an Aumsville-based contractor for the Calapooia Watershed Council, spent Friday killing weeds around thousands of plantings placed on the bank last  fall.

Earlier, the contractor had cleared the creek banks of blackberries and other invasive species. On an 11-acre parcel closer to the Willamette, the crew last fall got rid of a meadow of invasive reed canary grass and also planted native bushes and trees.

It will look beautiful when it’s all done, promises Rosario Franco, whose company is doing the work. (Listen to Franco in the video below.)

It’s all part of a multi-year project by the Watershed Council to restore the lowlands in the floodplain along Cox Creek to their natural condition. Later this year, the plan is to take out a small concrete dam at the former Nebergall packing plant, now the research center of ATI Wah Chang, to open up more of the creek as a wintertime refuge for fish in the Willamette River.

In 2012, the Oregon Watershed Enhancement Board approved a $199,000 grant from state lottery funds to pay for the restoration, which is expected to continue through 2017. (hh)