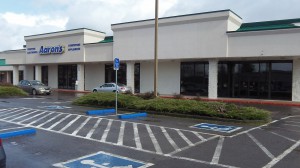 This is where Sportsman’s Warehouse wants to go.

Albany city planning officials have met with developers for Sportsman’s Warehouse, a nationwide sporting goods chain that has its eyes on space in the Albertsons shopping plaza off Waverly Drive. The planning department says no land use applications have yet been submitted, but the city has pending building permit requests for interior relocation and remodeling of tenant space at the southern end of the plaza. But there may be a hangup over signs.

In a report on difficulties with the city sign code and efforts to revise it, community development Director Heather Hansen cites a Sportsman’s Warehouse sign request as an example of the problem. The company wants one main sign and several smaller ones. A diagram in her report shows a Sportsman’s Warehouse sign over the entrance. Smaller signs along the front wall would say Hunting, Fishing, Camping, Reloading, Outerwear and Footwear. This “far exceeds the 100-square-foot allowance and would be considered three signs, which is not allowed.” But she says she’s exploring sign code revisions to allow such signs. Hansen’s report went to the Mayor’s Business Ready Task Force, which meets at 4 p.m. March 4 at City Hall.

Sportsman’s Warehouse has stores in 17 states, according to its website. which shows only one in Oregon so far, in Medford. No word yet on the timing or other details of the plans for the Albany outlet. (hh)