Speed display gets a test on First 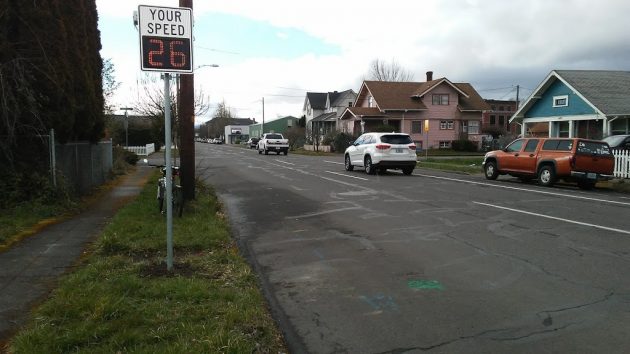 The speed display sign was moved to this spot on First Avenue last week.

A radar sign made virtually no difference in traffic speed on Albany’s Second Avenue last year. Now the city wants to test whether it changes anything a block away on First.

The speed limit on both legs of the one-way couplet east of central Albany is 25 mph. There had been complaints about speeding on Second, prompting the police department to test whether a permanently mounted radar unit would cause a change.

The sign was installed on Second last June. The city collected six sets of data, two before the sign went up and four afterward. “The results of all six were virtually identical,” transportation official Ron Irish says. “Average speeds were around 28 mph, and the 85 percent speeds varied between 31 and 32 mph.” (That’s the speed that 85 percent of the traffic stays below.)

Irish told me the sign was moved to First last week at the request of the Albany police because the department wants to test its effectiveness at a second location. The display should stay up for at least at couple of months in order for speed studies to show enough data.

When a vehicle approaches at 30 mph or higher, a bright light on the sign start blinking. When I watched the thing for a couple of minutes Thursday afternoon, the light came on once or twice but then stopped, suggesting the drivers had taken notice and slowed. So to that extent, the sign probably does have a momentary effect. (hh)


11 responses to “Speed display gets a test on First”