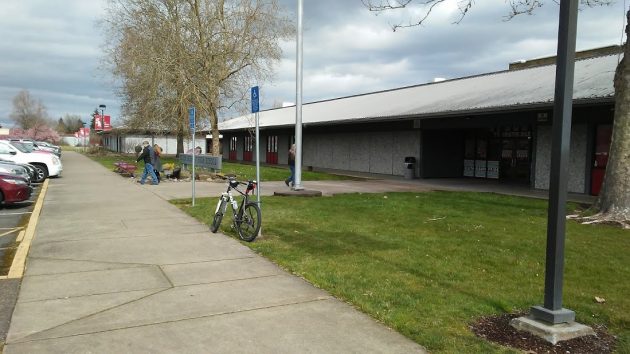 Outside the front entrance at South Albany High School at mid-day on Friday.

When they’re finished with renovations that include various 8-foot-tall fences, South Albany High School will no longer have the porous campus it has today. It will no longer be open to uncontrolled access all over the place.

The Albany school district has filed for a conditional use permit to allow the South renovations, and the city planning department has posted the application for public comment by March 20. The district also is asking for a waiver of the height limit on buildings in the school’s zoning district so that the planned new gymnasium can be 34 feet high. In addition, the district wants the city’s fencing standards to be adjusted to allow fences 8 feet tall.

The site plan submitted by the architects, DLR Group of Portland, shows a black, vinyl-coated chain link fence all along the school on 36th Avenue, with electronically controlled gates to allow school buses to enter and leave. Elsewhere, to close off the many access points between buildings, the plan shows decorative aluminum fences, also 8 feet tall.

There’s the possibility of a fence in front of the school facing Columbus Street. That one is shown on the plan between the front parking lot and the street and is listed as an “alternate.” If it’s built, it too would be 8 feet tall, and made of chain link coated in black vinyl.

The idea, project manager David McKay explained to me Friday, is to make the campus less porous. The fences are to make sure that the only access to the school’s interior courtyard and buildings is through the office building in front.

The addition of classrooms and the gym at South, plus the fences and related work, is part of the districtwide construction and modernization program for which voters approved $159 million in bond borrowing last year.

Fences also are a big element in two of the other major projects scheduled to start this summer, the replacement of Oak Grove Elementary School in North Albany and the construction of a new grade school near Timber Ridge in the northeast part of town. At both of the new elementary schools fencing will make sure no one gets in who hasn’t been cleared through the office first.

Security of school buildings is on everybody’s mind these days, as I learned when I rode the bike to South on Friday for a photo to illustrate this story. Somebody on the staff was out between buildings, talking to a police officer, and spotted me from a long way off as I was standing in front of the school with my phone. A few minutes later, Ken Fandrem of the Albany Police Department caught up with me. He had recognized me before, and I guess he just wanted to make sure.

His suggestion: If you’re going to hang around school buildings taking pictures, you might want to let the school office know. Just so that nobody gets the wrong idea. (hh) 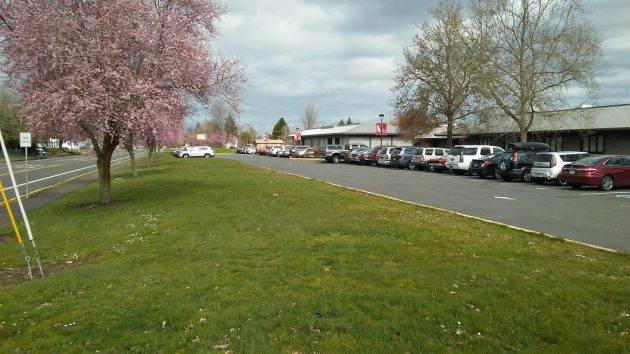