Somebody once lived here 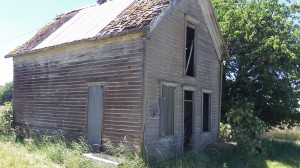 Riding through Linn County farmland the other day, I stopped at an old house. From the looks of what was left of it, I  guessed it was at least a century old, maybe more.

The roof was mostly holes, except where somebody had nailed up some sheet metal a long time ago. The front door and windows were lifeless gaps in the weathered wall. From the outside dimensions, I thought the place probably once had a front parlor, a kitchen in back and a room upstairs under the roof. Maybe there was another room in a side wing that now was overgrown by brush.

Nobody had lived there for many, many years. But somebody had lived there at one time. A farm family, most likely. There was the ruin of a barn farther back on the property. The site itself had a few trees, the land all around it was being farmed, and the grass had been cut a few weeks before, so this property was not abandoned.

The afternoon was sunny and warm, and I was wondering what life was like for the people for whom this place had been home. How did they fare, for example, during the Depression? How did the wars affect them? How often did they have to go to town for supplies, or did they grow their own food and didn’t need much of anything else?

I thought about these people while I looked at their place for a few minutes, and I took a photo or two. Then I got back on my bike. (hh)

Jim Clausen responded on June 9:  There’s a place in Alsea that always amazes me. It’s across the street from the small market. I usually have time to check it out as I get something to drink and a snack. The building looks somewhat similar to your picture — though it has a definite lean to the right. There’s a door upstairs that comes out to no-man’s land — no landing, stairs, or porch. The doors and windows are all crooked, the floors are warped, paint peeled, and holes in the walls and roof. Yet someone still uses the building for storage. It looks like a turn of the century building, perhaps a general store when Alsea was first founded.  Each time I visit Alsea, I’m surprised to see that it’s still standing and still in use. Check it out some time.