So what’s happening on Pirtle Drive? 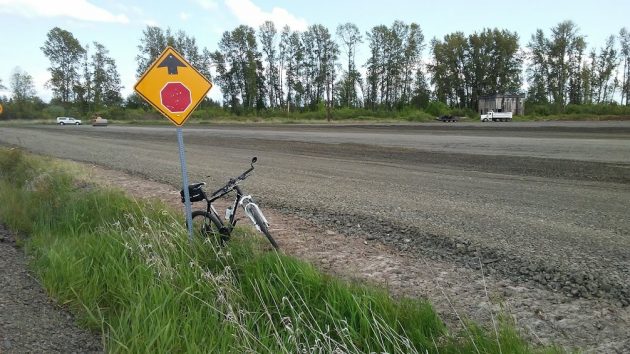 The industrial site on Pirtle Drive on May 5. In the far background, the abandoned Pirtle power station of the Oregon Electric.

On a ride through the countryside south of Albany this week, the bike took me to Pirtle Drive, where to my surprise it looked like something big was going on.

Pirtle Drive connects Oakville Road on the east with Meadow Road and the old Riverside School on the west. From time to time I take that quiet, rural road.

On Tuesday I was startled to see that a large tract had been cleared on the south side of Pirtle, just west of the old Oregon Electric rail line. Not just cleared — of what from a distance looked like tall cottonwoods — but part of it had been covered with a layer of rock which a roller in the distance was compacting smooth. It looked like the making of a giant parking lot.

Curious, I checked with Linn County to see what the building permit said. Turns out the county had no permit on file. A planner told me Wednesday that work like this would normally require at least an excavation and fill permit. But none had been taken out.

On Wednesday I was told that Robert Wheeldon, the county planning director, had driven out to the site that morning but could not contact anyone.

The land is zoned heavy industrial, which seems odd considering that it’s surrounded by farm land. But I understand it once may have been the site of a wrecking yard, which would explain how it got the industrial designation when county zoning started in the 1970s.

The current owner is in the honey business, but whether that has any bearing on this development I won’t know till I can reach him to ask.

One thing is obvious, though. Clearing the site has exposed to views from the road the abandoned and vandalized Pirtle power transfer station of the old Oregon Electric Railway. The concrete building sits on the other side of the track. And in the photo above, you can just make it out if you squint. (hh)


8 responses to “So what’s happening on Pirtle Drive?”