So just what’s going on here? 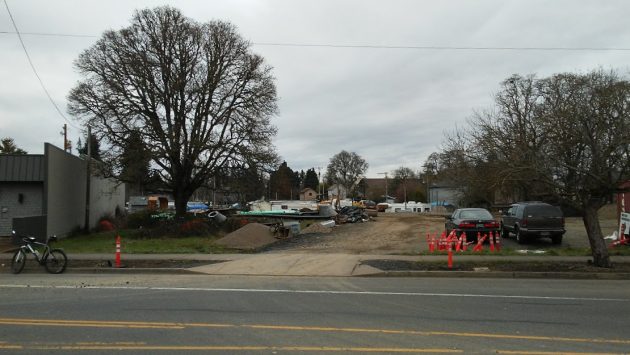 A new construction site on Santiam Road? Alas, no such luck…

To at least one reader, it looked as though Emery & Sons was building some kind of infrastructure on a big vacant lot off Albany’s Santiam Road, just east of the Carriage House Plaza and north of the tracks.

When she asked me what was being built there, I first went by the place to take a look and then, finding no one on the site to ask, to City Hall.

Turns out that Emery, the Salem-based construction company that has done several major Albany projects, is using the Santiam Road site as a staging area for working on its current contract.

Last May, Emery was the low bidder (out of three) for a $1.4 million project to replace more than a mile of sewer pipe in nearly two dozen locations throughout the older sections of Albany, from the Broadway Neighborhood in the west to the Willamette Neighborhood in the east.

The company is using a trenchless method known as pipe bursting. As the term implies, the process breaks apart the old pipe while pulling a new section through the broken old one. In this way, the crew is replacing 5,100 feet of 8-inch sewer mains and another 1,450 feet of 10-inch mains.

In Public Works, the engineer in charge of managing the project is Lori Schumacher. She told me the project started last fall and is likely to be completed by the spring.

Repairing the sewer network may not be glamorous work — especially now, during the rainy season — but imagine where we’d be if it didn’t get done. (hh)


5 responses to “So just what’s going on here?”