Smooth ride: How much longer? 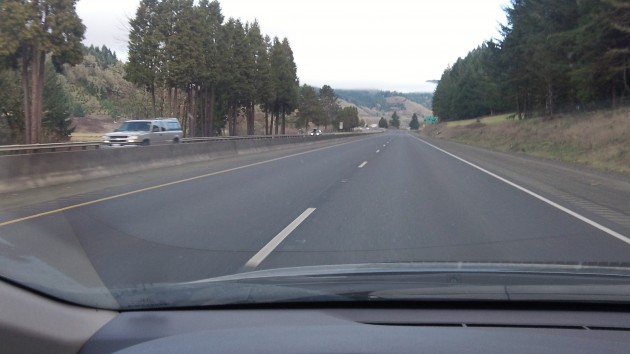 It’s a pleasure to drive on I-5, especially when it’s empty as here between Sutherlin and Cottage Grove.

The drive from Southern Oregon to the mid-Willamette Valley on Interstate 5 takes little more than three hours on roughly 200 miles of smooth asphalt without so much as a single chuckhole. And while you’re cruising along, you don’t often think about how to pay for good roads like this, or worry that it may get more costly one of these days. But it may.

What you pay now is 18.4 cents a gallon. That’s the rate of the federal gas tax. (The diesel tax is higher.) But it’s not nearly enough to cover the expenses of the federal Highway Trust Fund, which has had to be bailed out to the tune of $41 billion of general funds since 2008 and expects to have annual shortfalls of $13-14 billion each of the next several years.

With this in mind, Congressman Earl Blumenauer of Portland has called for a 15-cent increase in the federal gas tax, but the idea is unlikely to get far. Congress has refused to raise the fuel tax since the last boost during the Clinton years. And as a hearing by the House Budget Committee in Washington last April demonstrated, transportation policy now is tied up with a huge number of complications and competing interests.

The mileage driven by Americans has leveled off since about 2006, the hearing was told. That and increased fuel efficiency are cutting into the revenue going to the Highway Fund. So now there’s talk of taxing drivers by miles driven instead, and even of taxing them a higher rate, perhaps 15 cents a mile, for driving on interstates, which cost more to build and maintain than local roads.

Somebody at that hearing suggested that having a flat mileage charge — as Oregon is testing at 1.5 cents per mile with 5,000 volunteers starting in 2014 — is unfair to light vehicles that don’t damage the roads. Somebody else talked of doing away with the current ban on interstate tolling.

Conservatives are arguing for limiting spending from the Highway Fund for highways only. They want to let transit and other transportation programs try to get their money somewhere else. Liberals, such as Blumenauer, think that would be a mistake. They want instead to look at further widening the federal approach to highway transportation to include everything that affects mobility of people and goods.

Whether Congress raises the gas tax or does anything else to bolster the funding for maintaining the interstate system is uncertain. Oregon, though, has done an excellent job in recent years, spending hundreds of millions in federal and state bond funds on I-5. And as drivers traveling up and down the state, we can only hope that ODOT will continue to be able to maintain what it has built. (hh)


4 responses to “Smooth ride: How much longer?”