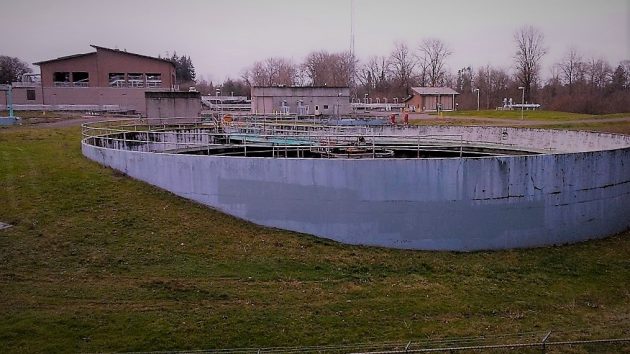 One of the old tanks at the Albany-Millersburg sewage treatment plant, in a shot taken last week.

After years of study and weighing alternatives, Albany public works officials say the best way to deal with smelly solids at the Albany-Millersburg sewage treatment plant is to build an off-site facility to turn the sludge into class-A compost that could be sold or given away.

They’ll present their idea at a joint meeting of the Albany and Millersburg city councils at 5 p.m. Thursday in the Albany council chambers.

The treatment plant was completed in 2010 at a cost of around $70 million. It was designed around a solids-handling system — named “Cannibal” — that turned out not to work. Since then, the plant has shipped sludge to the Coffin Butte landfill at the cost of hundreds of thousands of dollars per year.

The plant was designed around the Cannibal system, and because of space constraints and other reasons, conventional treatment methods — aerobic or anaerobic digestion — are no longer feasible there. For instance, tanks previously used for anaerobic digestion are still in place, but a “primary treatment process” necessary for this was demolished when the new plant was built.

Hence, a memo to both councils says, “it is the recommendation of staff and Kennedy/Jenks (consultants) that a small-scale facility that can process a portion of the (plant’s) solids be built initially with capacity added as resources allow.” (You can read the complete memo here.)

The staff is asking the councils to go ahead with “pre-design” of this alternative. One of the things this effort would do is to find a place where this composting plant could be built. Apparently there’s not enough room at the treatment plant, near the banks of the Willamette river.

The cost of building and operating a full-scale composting facility for 20 years was given as about $27 million. Whatever is done with the sludge — continuing the landfill option as long as it’s available or the solution now being proposed — will have to be paid for by Albany and Millersburg ratepayers. That’s unless the cities’ multimillion-dollar lawsuit against the designers of the sewage plant results in a judgment or settlement to cover the costs. (hh)