Smart meters? Not yet – Hasso Hering

Smart meters? Not yet 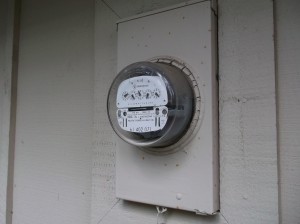 We’ll be glad to make do with dumb meters like this for a while longer.

Some people around the country are worried about electric meters known as “smart meters,” and from the standpoint of privacy and personal autonomy they may have a point. But if you’re a customer of Pacific Power here in Oregon, you don’t have to worry just yet.

Last week the Chicago Tribune reported that in Naperville, Ill., two women were arrested when they tried to prevent the city electric utility there from installing smart meters. The city of about 150,000 was installing 57,000 of those meters all over its system, and if customers didn’t want them they would have to pay $25 extra a month to have their old meters read.

Smart meters can be read remotely, but they also allow two-way communication between the utility and your house. Critics fear they would eventually enable the utility or some central authority to monitor and even control their daily electric use, for example by cutting them off during times of high demand.

I asked Pacific Power about smart meters. Tom Gauntt, a company spokesman in Portland, pointed out there’s a difference between automated and smart meters. Automated ones merely send a signal that can be read from the street so the meter reader does not have to go up to each one, and Pacific has installed them in Washington state and a few places in Oregon where access to meters was difficult. Smart meters, though, are not in the plans.

Gauntt told me: “Smart meters would … work best on a smart grid of transformers and substations all equipped with interactive equipment. … This technology is evolving and does not seem to have reached a stable industry standard point where an investment is advisable on a scale we would  have to make it.”

The upshot? In what we used to call Pacific Powerland, we’ll continue to be able to make our own decisions — about how much power to use when — for a good long time. (hh)