Smart meters about to arrive 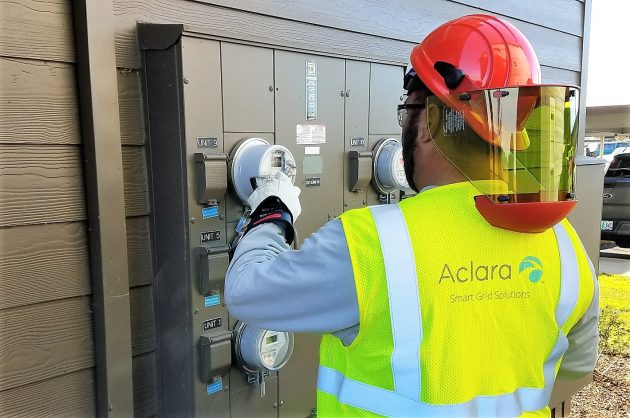 A man from Aclara, Pacific Power’s contractor, installs a smart meter at an apartment house in Independence. (Pacific Power photo)

So-called smart electric meters are coming to our houses and businesses in the mid-valley starting next month, whether anybody needs one or not.

I had missed the Jan. 9 announcement from Pacific Power. But a reader’s email expressing concern, and then a story I happened to see in The Bulletin newspaper of Bend, prompted me to ask the utility what was going on.

Pacific Power spokesman Tom Gauntt in Portland promptly provided answers. In short, starting in Independence this month, and in the mid-valley beginning in February, the utility is replacing 590,000 electric meters in Oregon with new digital smart meters.

By means of low-frequency radio, these two-way communications devices send information on electric use to the utility, doing away with monthly meter readings. They also instantly track outages, Pacific says, allowing a faster response to make repairs.

Via a “secure website,” the meters allow customers to track their own hourly power usage “so they can adjust their activity to reduce both their carbon footprint and bill.”

In an email to hh-today on Jan. 8, reader Sandi Foster objected to smart meters as well as the cell phone towers approved at South and West Albany high schools. She worried about the radio waves causing health problems, especially in tightly packed neighborhoods. “I think,” she wrote, “that Albany should protect its citizens and keep the jobs of its meter readers, and I think it should be illegal to put 5G towers and amplifiers in or near residential areas.”

Pacific says the smart meters are proven to be safe and not associated with any negative heath effects. “In fact, living near a smart meter for 20 years is no different than making a single 30-minute cell phone call.”

In Pacific’s other Oregon service areas, the installation is planned through this year and next, ending in Pendleton and Enterprise toward the end of August 2019.

You don’t actually have to accept a smart meter, but opting out costs extra. Pacific says it will charge a one-time fee of $169 for postponing the installation, plus $36 a month to cover the cost of having someone reading the old meter in person. The extra charges were approved by the Oregon Public Utility Commission. But getting a smart meter costs customers nothing.

Aclara, the utility’s contractor, is based in St. Louis. On its website the company also promotes smart-meter systems for water and gas utilities, as well as a combined system for all utilities including electric. So far, though, Albany’s municipal water system and the Northwest Natural gas company have not said anything about going that way. (hh)

The story has been edited to add information on the opt-out option, which Pacific says 1 percent of customers nationwide have taken. (hh)


19 responses to “Smart meters about to arrive”