Small mystery: How come this puddle? 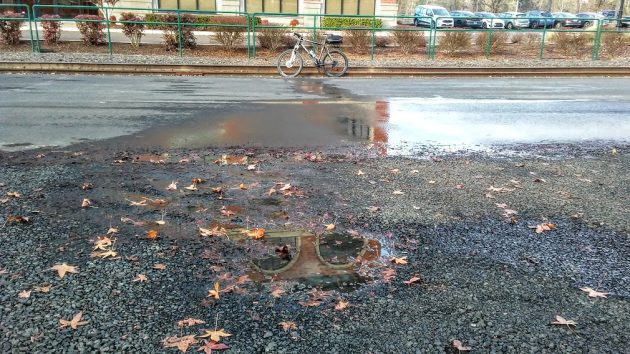 Has it come to this — a story about an Albany puddle? Apparently so. But it’s a special puddle because in its silent way it poses a question: Why is it there?

For months on frequent bike rides in that area, even in the summer and during long periods of no rain, I’ve come across this smear of water across Water Avenue. It rises from the puddle you see in the foreground, mirroring part of the Wheelhouse office building on the riverfront. The water flows north across the street and seeps into the railbed of the Portland & Western’s old Oregon Electric track.

The mystery, if indeed it is one; Where is this flow coming from?

My first guess was that’s it’s a leak in an underground pipe. The city water department thought so too when they got word of this perennially wet area during the construction of the nearby lift station and the new sewer main along Water Avenue in 2019 and this year.

There’s a 12-inch cast iron water main in that area. Jeff Kinney of the water department sent word that the crew did extensive leak detection. They listened for leaks and excavated a couple of spots to inspect the pipe.

They didn’t find a leak, but the conditions weren’t the best because of the sewer construction. So they’ll look again next summer when, in the words of Public Works Operations chief Chris Bailey, “the water table has dropped and they can take a better look all along the main.”

I wondered if it could be a little spring. Possible, I learned, but not likely in that terrain.

One response to “Small mystery: How come this puddle?”