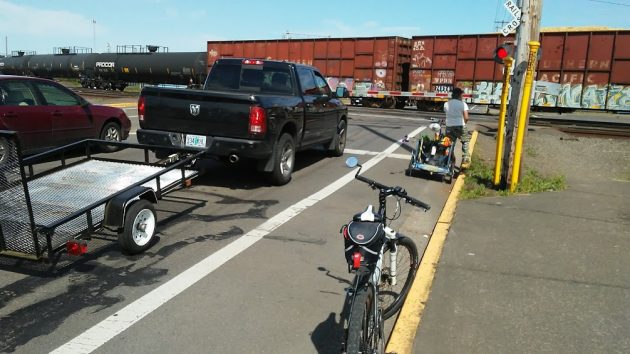 Waiting at the Queen Avenue railroad crossing on May 7, 2020.

Waiting at Albany’s Queen Avenue railroad crossing gives you plenty of time to contemplate one of the riddles of our time, such as why it takes ODOT so many years to get going on a simple project that doesn’t seem all that necessary in the first place.

There are three long-standing problems at the crossing.

The first is long waits in traffic while the Portland & Western builds freight trains in the adjacent yard. The second is the uneven condition of the pavement panels between the rails. And the third is that very rarely, twice over the last 10 years or so with fatal results, somebody makes the mistake of evading the gates and getting clobbered by a passing train.

ODOT tried to solve the delay problem by giving the P&W millions of dollars to move most switching operations to its Millersburg yard, but the railroad failed to follow through and ODOT did nothing about it.

The second problem, smoothing the crossing surface, apparently is up to the Union Pacific or the PNWR or both, and the railroads have not done anything even though the problem has been getting worse for years.

As for the third, the occasional safety issue, ODOT has been working on this since at least 2016. That year, an ODOT plan for safety improvements — changes in the gates and sidewalks — was presented to the Albany City Council, and at the time construction was expected in 2019.

The next year, in 2017, the Oregon Transportation Commission approved a $1.3 million project to do the safety improvements, with construction expected in 2020.

This past February, the draft of ODOT’s next Statewide Transportation Improvement Plan (STIP) again included the Queen Avenue crossing improvements, with construction expected in 2021.

Now, in May 2020, ODOT’s Jen Hedlind, a transportation project manager based in Springfield, says: “The project is in our design phase and currently we are working with the railroads on the design at this crossing. Once we get their feedback and cost estimate back we will begin to move forward with completion of initial design, begin our right of way phase and move toward construction… We are targeting construction for 2022.”

While the construction date has proved a moving target, the irony is that there really is no safety “problem” to fix. The gates work just fine, and for the tiny amount of foot traffic the lack of a proper sidewalk or sidewalk gates is no big deal. There’s a problem only when somebody ignores the blinking lights, the clanging bells and the lowered gates and tries to cross in spite of those triple warning signs that are obvious and plain to see.

If they wanted to do something that would help alleviate an actual problem — the long waits in traffic — they would design turn-around lanes on both sides of the crossing so motorists in the right lanes could more easily escape the way two of them did in the wind-whipped video below. (hh)

Monday afternoon, ODOT’s Jen Hedlind provided this additional information: “Part of the project is replacement of the crossing panels. The design is still in process of finalizing but the last design had all tracks getting new concrete panels. This work is part of the safety project but the work on the railroad tracks and the crossing signals will be conducted by a railroad contractor paid for by funds from this safety project.”


7 responses to “Slow going at the Queen Ave. crossing”