Slow down so he doesn’t get hit 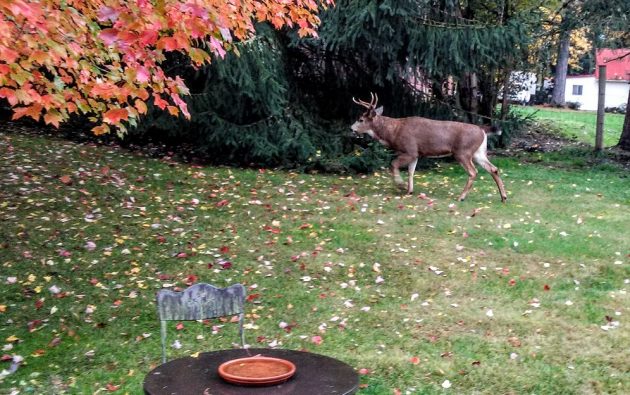 With deer season over, maybe this young fellow felt safe to wander through our back yard. Actually, the hunting season is not what deer in North Albany generally have to worry much about.

It’s traffic they should worry about instead. Some do. The little herd that browses the yards and gardens in this area has gotten pretty good at staying off the road when they hear someone in a car or truck come speeding through.

But others, not so much. It’s the fawns that haven’t learned. One jumped in front of me some months ago at the top of Scenic Drive just south of Valley View. The damage to the truck was minor. As for the hapless young animal, I stopped and looked for it. But it was nowhere to be found. Apparently it was able to run off — or at least to limp away.

There are traffic signs warning of deer on some of our roads out here. Take them seriously and slow down so that even if an animal jumps in front of you, you might not hit it all that hard.

Fellow drivers, take note: If the guy in front of you slows way down on a winding part of the road, it’s probably not to annoy you. Maybe he’s just trying to avoid another collision with a deer.

Some of the warning signs have been there for a long time, and our deer herds seem to be growing. They have taken up different routes from years ago. So the absence of warnings doesn’t mean that deer aren’t there.

As for the visitor above, I had not seen him before. No idea if he was just passing through of if we’ll see him again. I just hope he doesn’t get hit.  (hh)


3 responses to “Slow down so he doesn’t get hit”