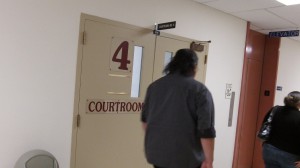 The sleep driving trial was scheduled for Courtroom 4 but did not happen.

Linn County’s “sleep driving” court case should have been over long ago. But it keeps dragging on.

On Tuesday morning, Mandy Kenney showed up in Circuit Court for her scheduled trial for impaired driving. At least four law officers had been called to testify and were cooling their heels in the hall. But four other trials were scheduled at the same time in Courtroom No. 4, with the clear expectation that all but one would have to be postponed again. Is that any way to run a railroad, let alone a court system that has power over people’s lives?

Kenney’s case began early on Feb. 2, 2012, when she found herself by the side of Richardson Gap Road, next to her 1993 Camry, which had run into the ditch. Her blood alcohol was zero, but she had taken Ambien, a sleeping aid, the night before. She would discover later — and her doctor wrote the court — that her aimless driving in the middle of the night was a side effect of the sleeping pill. End of case? Hardly.

The state said you don’t have to have any intent to be charged with DUII. But in May, the Oregon Supreme Court said no, a DUII prosecution must also show that the driver acted voluntarily. So now Mandy’s lawyer needed and got a continuance to prepare a new defense. Expert witnesses may have to be called. Another court date, though still not a trial, will be in July.

Citizens interested in basic justice, as well as taxpayers funding law enforcement and the courts, would say: Hey, nobody got hurt here, and this woman doesn’t need any more trouble. Just make sure the public gets a big warning about sleep driving induced by medication, and drop the case. (hh)