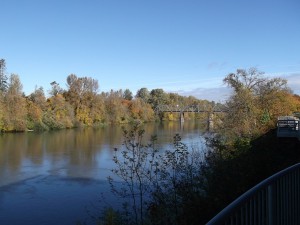 A mild fall in the mid-valley so far, but not everywhere, such as, for instance, Britain..

Piers Morgan, the Briton who does an interview program on CNN, had two men on the show to debate issues involved in climate change. It was not a helpful segment. The two guests talked over each other, which seems to be the rule on cable talk shows, where manners don’t count. Then the host wound it up by saying that tonight — it was Tuesday night, Dec. 4 — it was 60 degrees in Washington, which evidently is where his show originates. That sounded as though it was meant to make some kind of point. Sixty degrees on a December night, wow, if that’s not warming, what is? He ought to be glad he’s not back home. There, the Daily Mail reported on Wednesday morning: “The Big Freeze that heralded the start of December is set to continue, with sleet, snow and hail covering much of the country all week. The cold snap will persist, with temperatures dropping to a lower-than-average minus-8C in Scotland … and up to 10 cm of snow expected.”

So while it was mild in the mid-Atlantic states — and in the Pacific Northwest too — it was bitter cold in the British Isles. What does that say about the climate, or about climate change? Nothing at all. It just means that the weather is milder or more severe than usual in different parts of the world.

Around here, though, we have been wading through puddles and mud as we often do this time of year. Nothing unusual about that. When the weather is unusual, it says nothing about climate change. It just means that weather is rarely average. It varies, and that sounds like a pretty good definition of weather in the temperate zones of the world. (hh)