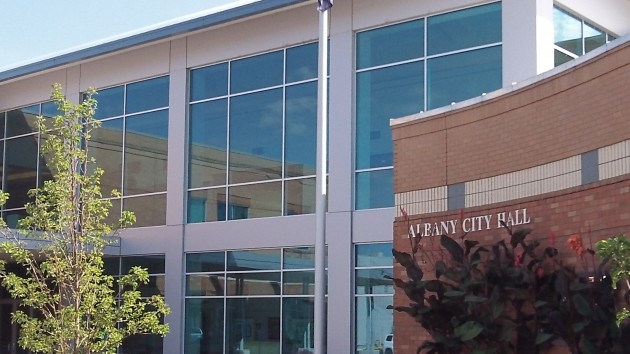 Albany City Hall, where a decision about new initiative proposals must be made.

Rather than going to court to salvage his rejected initiative proposal, Albany petitioner Tom Cordier is trying something else. Friday he submitted six new initiatives, all aimed at forcing the city council to seek voter approval of any utility franchise fees or “privilege” taxes. But the way I read the texts, they likely will run into the same objections that led City Clerk Mary Dibble to reject his first effort on Wednesday.

Based on advice from the city attorney, Dibble rejected Cordier’s measure on the grounds that it dealt with administrative rather than legislative matters and also violated the constitution’s one-subject rule.

Of the six new proposals, each deals separately with repealing, imposing and increasing franchise fees and privilege taxes. But if it’s true that Oregon courts consider utility fees or taxes administrative matters, the city likely will reject all six proposals for that reason again. But Cordier cites a 2010 ruling by a judge in Yamhill County that upheld a petitioner’s right to proceed with a similar initiative.

Each of the proposals also has an added provision. Each would require the city to give “at least two weeks notice … to all city electors” if the council holds a hearing to consider legislation that would conflict with the charter amendments. All city electors? Does that mean 25,000 postcards? And how could the council consider anything known in advance to violate the city charter? In any case, this added language sounds suspiciously like a subject separate from the fee or tax question itself. But again, the 2010 ruling knocked down this objection in that case.

Franchise fees weren’t on anybody’s radar until the city council increased the fee or tax indirectly imposed on customers of Pacific Power. That decision could have been handled far better than it was. For one thing, a separate public hearing on that issue alone — not only on the entire budget, which called for the increase — would not have hurt. (hh)