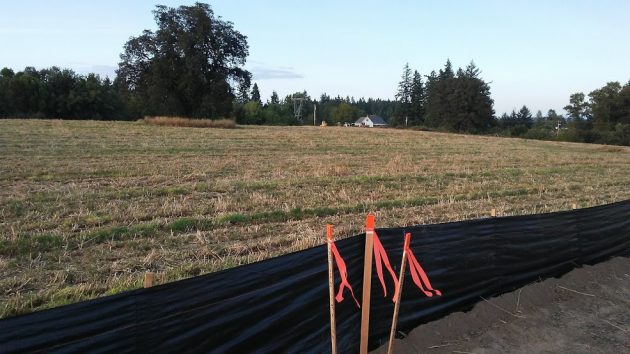 A plastic erosion barrier surrounds the harvested grass seed field that is about to become Phase 1 of the Pheasant Run subdivision in North Albany.

In a matter of days, construction crews will start tearing up the ground in North Albany where Hayden Homes plans to develop a 147-lot subdivision it calls, apparently without irony, “Pheasant Run.”

Phase 1 of the development is for 46 lots on the west side of Crocker Lane. (The job site address is 2262 Crocker N.W.)

Matthew Ruettgers, development services manager in the Albany Community Development Department, said Monday that the city is getting ready to issue a site improvement permit allowing the developer to construct streets, utilities and stormwater facilities.

A plasic barrier to prevent runoff or erosion has already been strung around the site. When the city has inspected this work, it will issue an erosion contol permit. At the same time, it will issue a permit to demolish a house the property.

Ruettgers expects the earth-moving to start within the next week or two.

The subdivision was controversial when it as approved in May 2018 after lengthy hearings before the planning commission and the city council. The site, part of a grass-seed farm, has eight stately oak trees estimated to be at least 100 years old. Six of them are scheduled to be cut down. Two others are to be saved, according to the approved plans. (hh)


13 responses to “Site work, demolition to start at ‘Pheasant Run’”