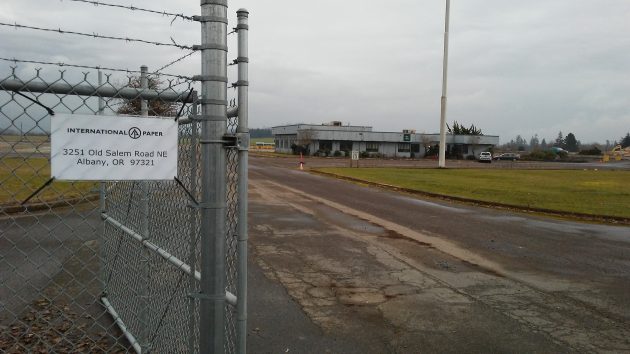 The gate to the cleared but not-quite vacant site of the former Albany Paper Mill on Jan. 31.

The sprawling Millersburg site where International Paper shut down and demolished the Albany Paper Mill still sits mostly empty, presumably awaiting a buyer. But some local officials have visions of turning the place into an intermodal shipping hub that would bypass the troubled Port of Portland and link the valley to the world.

This sounds like  fantasy now, but if it helps agriculture and other valley industries, it’s worth pursuing. Somebody in Millersburg told me he thought Rep. Andy Olson, R-Albany, knew something about this. So I asked.

Olson was part of a legislative commission on transportation last year. In Ontario the panel learned of a project to create, for an estimated $22 million, an intermodel hub there that would “bring product to rail.” It occurred to Olson that this could prove useful on the west side of the Cascades as well.

“Then I turned to the old International Paper property,” Olson wrote me. “It makes sense. You already have two (Union Pacific) lines alongside the property near the freeway. You have great access for trucks off Old Salem Road, but what makes it even better, ODOT and Linn County have set plans to build an interchange in that area in the future, closing down (the) Murder Creek and Viewcrest ramps. I don’t think you get a better point of access.”

The legislative commission toured the IP site when it met in Albany in October. Olson said he and Linn County Commissioner Roger Nyquist shared the hub idea with the panel. The legislature, now in session in Salem, is supposed to come up with a transportation package, and Olson thinks the Millersburg hub idea could become an item in that.

Why a truck-to-rail shipping center there? “The hub is a stepping stone around the Port of Portland,” Olson says. “The port continues to be a problem for business.” And so, for shippers in western Oregon, the intermodal hub would create a path around Portland to the much bigger ports in Tacoma, Oakland or Long Beach.

Sound far-fetched? Maybe so. But transportation is one of the keys to a strong regional economy, and this would be one way to make up for the paper mill, which closed in December 2009 with the loss of 270 well-paid jobs. (hh) 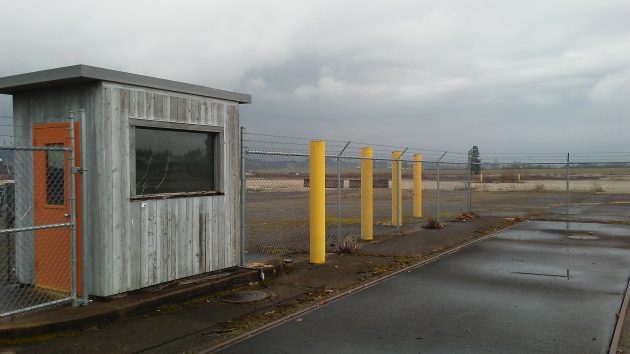 Maybe they could even reuse the old truck scales.