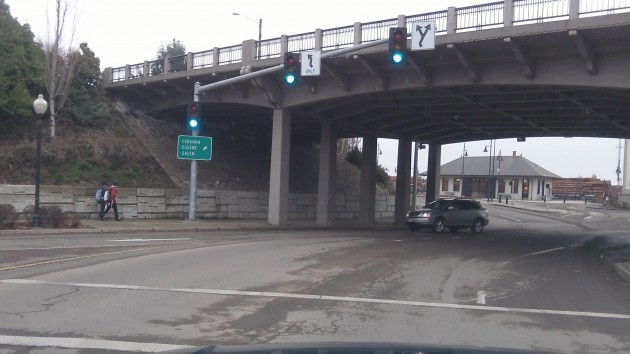 A windshield view of the underpass on Dec. 17.

So, for lack of a more exciting topic at the moment, back to the traffic signals at Ninth Avenue and Lyon Street under Albany’s Pacific Boulevard overpass. As you can see here, another episode of waiting at the light on Dec. 17 yielded another snapshot of someone coming through the underpass after the signal on Ninth has turned to green.
What’s going on, I asked Ron Irish, the city transportation systems analyst who knows more about Albany traffic than anyone else. These are state highway signals, and Irish has asked ODOT about them. The answer from ODOT is that the lights’ timing is fine, even featuring a brief interval of all red.

Irish’s conclusion: “If a driver waiting on Ninth gets a green and sees a (northbound) vehicle already under the overpass, depending on their speed that NB driver entered on either an old yellow or a red signal.”

So why do we see this so often under the underpass? Irish again: “My feeling is that the design of the intersection together with the fact that it’s approaching capacity during peak hours contributes to the high incidence of red-light running. Unlike other signalized intersections, in this one a driver continuing on through a yellow/red light isn’t running much of a risk of having an angle crash.”

Unless, and this is just my opinion, a driver on Ninth is in a great hurry and has snappy car that gets off the line at speed the instant his light turns green. (hh)