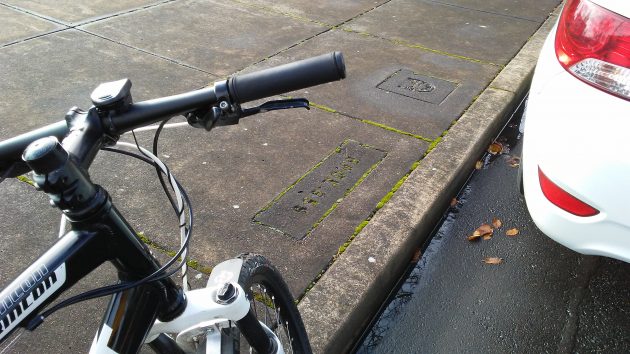 The sidewalk inscriptions in front of what used to be 116 West First Avenue commemorate N.B. Sprenger (top) and the Albany Elks Lodge.

The mystery of the name in the sidewalk on Albany’s First Avenue — if a mystery it was —  has been cleared up, as far as I’m concerned.

On Nov. 23, I wrote about having stumbled across a name and year, “N.B. Sprenger, 1907,” pressed into the sidewalk on West First. And I wondered who that might have been. Cemetery and other records available online pointed me to Nicholas Sprenger, who was born in Germany in 1845 and died in Albany in 1921. I wasn’t sure about the “N” in the inscription, though, because it had eroded and could have been a “K.” And there was a question about whether First Avenue had a concrete sidewalk as early as 1907.

At the Albany Regional Museum on Saturday, staff members Judie Weissert and Mara McKinney helped me find several photos in the published collections of the late Roberts Potts. The pictures show the Elks Lodge at the corner of First and Lyon in 1908, and the street and sidewalk outside the building clearly look paved. So it is quite plausible that the concrete sidewalk was poured in 1907.

I used a fingernail to scrape moss and other crud out of the first initial. That done, the letter appeared to be pretty obviously an “N,” as I had first supposed. And it looked that way to Judie as well.

In several city directories of the period before and after 1907, N.B. Sprenger is listed as an Albany resident. On Monday, at the downtown Carnegie Library, I leafed through Polk’s Linn County Directory for 1913. It says that N.B. Sprenger and his wife, Clara, lived out on “Corvallis rd., RFD 3.” (I had to look this up: The initials stand for rural free delivery, a system the postal department adopted in 1896.)

According to Polk’s, in 1913 there were six separate property taxpayers with the last name of Sprenger in Linn County. Five of them had their property in “Shedds.” The sixth was N.B, whose property was assessed as having a value of $2,700. The directory also disclosed that the Albany Sprengers had a boarder, Elliott B. Sprenger, a relative no doubt and a teamster by trade.

Significantly, the directories list Mr. Sprenger’s occupation as “plasterer.” Seems to me that makes it likely he was employed either to pour or to smooth the concrete in front of what was, at the time, the home of the Elks. (By the time I got to Albany in 1977, the Elks had their lodge on Fourth Avenue across from the courthouse, where City Hall is now. And their original building housed a lighting store on the ground floor when it burned down a year or two later. Now it’s an open space serving as a privately owned outdoor art park.)

I paid a visit to the Masonic Cemetery off Broadway Street, where I had read that Nicholas Sprenger was buried. I wandered up and down the narrow walkways until I found his and Clara’s grave. As you can see in the photo below, the massive marker bears the emblem and initials of the Benevolent and Protective Order of the Elks, signifying that Nick was a member. That clinched it. Because a couple of feet away from the Sprenger impression in the sidewalk, there’s the mark of BPOE Lodge 359, presumably pressed into the wet concrete at the same time as the name.

One remarkable thing about all this: Nick Sprenger and his colleagues sure knew how to make concrete. Their work has lasted well more than 100 years  and it’s still in good shape. (hh) 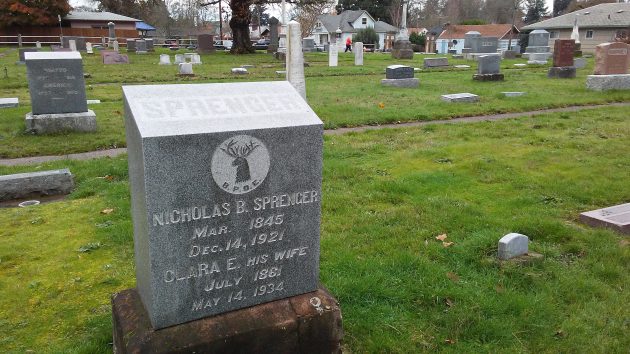