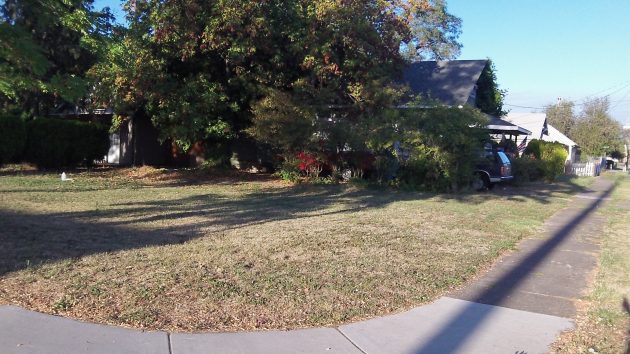 One of three vacant lots the city of Albany owns near the corner of Ninth and Jackson.

If you served your time after a felony conviction, you may have a hard time finding a place to live even though you have landed a job and otherwise gone straight. So you end up at a homeless shelter such as Albany’s Helping Hands.

The shelter wants to find other housing for these fellows. And this week John Donovan, development director for Helping Hands, approached the city council with the idea of providing homes on city-owned property west of the shelter on Ninth Avenue and Jackson Street, near the Pacific Boulevard overpass.

The way City Manager Wes Hare understands the idea, Helping Hands would like to build some form of apartments for past offenders now living at the shelter because they can’t get housing anywhere else. When I talked to Donovan after he appeared before the council’s work session Monday, I got the impression he was talking about manufactured houses that would be placed on the vacant city lots.

The city owns lots at 503 and 519 Ninth Ave. SE. and at 817 Jackson. Hare said there also is some street right-of-way in the vicinity that is apparently unneeded and could be vacated.

One catch is that the property is zoned industrial and would need to be rezoned residential, which seems odd because those sides of Ninth and Jackson already have a few houses. Anyhow, changing the comprehensive plan and then the zoning would involve hearings before the planning commission and the city council, so if any of this idea happens at all, it won’t be quick.

The city apparently acquired the lots a long time ago in case they might be needed if ODOT decided to expand the Pacific overpass. The council wanted to know if the parcels would ever be necessary for transportation.

The next step in all this, Hare told me, “is to get a better idea of exactly what Helping Hands wants to do and then determine what the path would be to do it… I would think we could come back to council with a report about the various issues surrounding the properties and Helping Hands’ plans in the next month or two.” (hh)