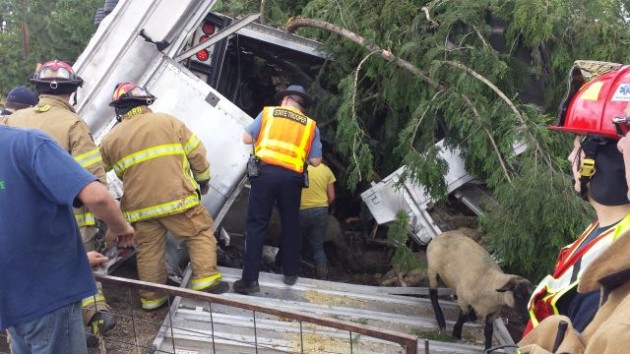 You’ll likely see this photo or one like it on the news tonight or in the local paper tomorrow. The Oregon State Police took it this morning along Highway 226 near Scio. A truck pulling a livestock trailer had overturned by the side of the road. The driver was hurt and taken by ambulance to the Albany hospital. The state police said the trailer had contained “more than 300 sheep” and in the accident, some of the animals were killed and others injured. “Firefighters, police and citizens worked together to help remove sheep from the overturned trailer,” the OSP said. “Veterinarians and other personnel from Oregon State University College of Veterinary Medicine were en route to assist with handling the remaining injured sheep. The sheep’s owner is also on scene assisting.”

Accidents happen, of course. I’m wondering how “more than 300 sheep” can be crammed into a trailer. (hh)