Written May 1st, 2021 by Hasso Hering
Comments: one response. 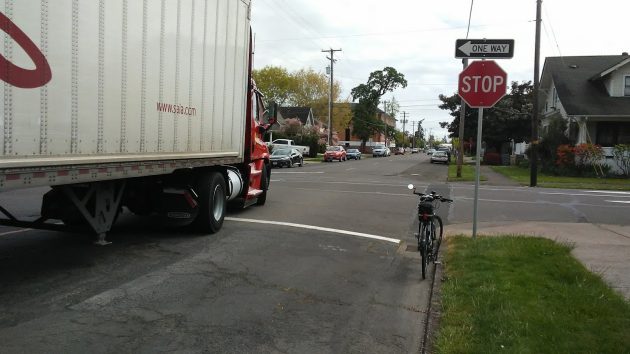 On Madison Street, being considered as a “bike boulevard,” a truck turns left on Second Avenue Friday.

Madison Street in old Albany doesn’t seem particularly unsafe for bike riders like me. But the city says there have been five car-bike crashes over five years, so ODOT is paying for most of a safety upgrade planned to be constructed in 2022.

There was talk of “dedicated bike lanes” in a memo to the council, but these will be striped green bike lanes only across intersections — at Fourth and Fifth avenues — where Madison is a through street and the side streets have stop signs. The idea is to remind drivers to look for bike riders on Madison.

The rest of the way in the seven blocks between First Avenue and Pacific Boulevard, there will be “sharrows.” These are arrows painted on the pavement. They are intended, in the words of city traffic expert Ron Irish, “to reinforce the recommended place for cyclists to position themselves.”

In addition to the sharrows and green lanes, there will likely be speed “humps,” 14 feet wide and 3 inches high, with “wheel path gaps” for emergency vehicles.

The council also agreed to consider additional treatments that would turn Madison into a so-called “bike boulevard” if the neighborhood wants it. Exactly what that involves is not clear.

“If the neighborhood is interested, they will be involved in determining exactly what those improvements might be,” Irish said in an email.

Elsewhere, bike boulevards have featured additional traffic-calming elements to keep down vehicle speeds. On Madison, up to $55,000 additional is available to a pay for such items.

Now that the council has agreed, Irish said the city will contact the neighbors.

On the bike, I don’t often take Madison to go anywhere, but lately I have done so because of the pending ODOT grant and the boulevard idea. It’s just one man’s opinion, but to me the route seems safe enough. A bigger issue is that the pavement is a mess. Nobody mentioned the rough pavement at the council last week.

If you want a reminder of what the street looks and feels like on the bike, take a look at the video below. (hh)

One response to “Seven blocks: Bike safety on Madison Street”