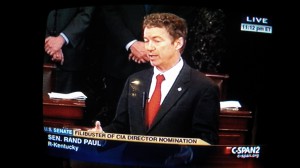 The question Sen. Rand Paul of Kentucky asked during his filibuster in the U.S. Senate on Wednesday may have seemed absurd. Does the Obama administration believe it has the power under the Constitution to use a drone strike to kill an American citizen on U.S. soil who is not an imminent threat to the country? The question seems absurd because the anser is obvious: No, the president has no such power. So why didn’t the president give that answer?

Like other presidents, Obama may be reluctant to acknowledge any limits to what he can do under certain circumstances. But what Paul said he wanted to know was whether drone strikes could be used against non-combatant enemies of the United States in this country. The administration’s white paper on this subject talked about imminent threats, but it was not completely unambiguous on the point Rand was raising. Of course there is no lawful or constitutional way for the federal government to order military air strikes in this country against anyone unless they are engaged in a current attack against Americans, as in the case of the fourth plane on 9/11, a case cited by Sen. Dick Durbin of Illinois. So it should have been easy for Obama to give Rand the answer he wanted. His long silence is hard to understand. (hh)

From Lori Rutledge, via Facebook: The question must be too simple for the Prez.  I’m guessing when this is over he will again, blame the Republicans.  He could have ended this hours ago.