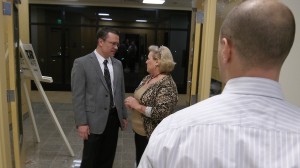 Just after dark on Monday, Conger was about to attend a fundraising reception in the event center on the fourth floor of the riverfront Wheelhouse in Albany when I intercepted him with my hand-held video camera.
Married and the father of five, Conger, 45, is a graduate of Humboldt State and Harvard Law School and has worked as a businessman and a lawyer. In 2010 he was elected to the Oregon House and now, while serving his second term, he is running for the Republican nomination to go against U.S. Sen. Jeff Merkley, a Democrat, in the fall of 2014.
His resume includes four years as a congressional aide and being an adjunct professor at the University of San Diego School of Law.
In the Republican primary next May, Conger is not the only announced candidate. Among the others is Jo Rae Perkins of Albany, whose Facebook entries said she was campaigning in Pendleton Monday.
Meanwhile, Knute Buehler, a Bend surgeon and former candidate for secretary of state, announced for the Oregon House in District 54, the Bend district now represented by Conger.