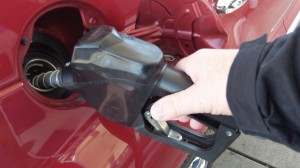 Relax, this is a simulation, not real self-service.

Senate Bill 127 in the Oregon legislature is rekindling an old debate that had all but died out: Self-service gas, yes or no?

Oregon and New Jersey remain the only states in the country where motorists are not allowed to pump their own fuel at gas stations open to the public. It’s a silly law, actually. What’s wrong with putting gas in your car yourself? But most people and politicians seem to like the law the way it is — in New Jersey and in Oregon too.

Now the Oregon Senate’s Veterans and Emergency Preparedness Committee has a committee bill — no sponsor is individually named — that would relax the Oregon ban on self-service ever so slightly. It would allow self-service in an emergency when a mandatory evacuation has been ordered. The thinking seems to be this: With everybody having to leave town all at the same time, it would help if people did not first have to line up at gas stations and wait for the attendants.

But the bill strikes me as a bad idea. Imagine the panic and confusion during a mandatory mass evacuation — ahead of a big fire, say, or some other disaster. Is that the time when you want a bunch of Oregonians unfamiliar with gas pumps to use one for the first time? Here’s a better idea, even though I know it won’t seem better to a lot of you: Repeal the ban, and when it comes to how best to run a gas station, let the owners decide on their own. (hh)

From LaMont Matthews: If you travelled back and forth to California as often as I do, you might have a little different take on pumping your own gas. I always look forward to getting back to Oregon with a near empty tank where the gas is way cheaper and the attendant not only pumps it but washes your windshield.

From Ted Salmons, via Facebook: Does anybody actually think that during the type of emergency they’re talking about, the DEQ nazis will be out at the gas stations making sure that only the highly motivated and well trained attendants are pumping the gas.  If they’ve got half a brain they’ll be “heading for the hills” too.