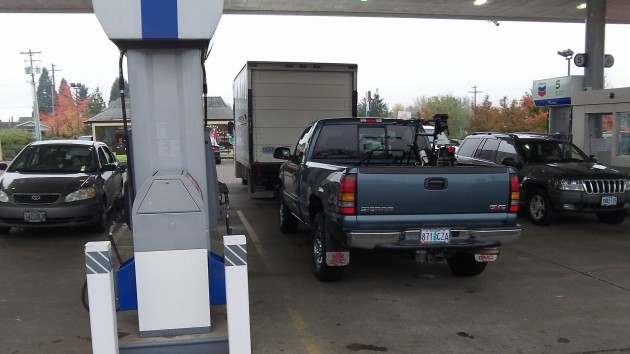 When you’re waiting long enough to take a picture, you may wish for self-service.

Sometimes you get the idea that it might not be a bad idea for Oregon finally to give up its ban on self-service fuel. But then the weather changes and you think no, for that and other reasons, let’s just keep the law the way it is.

The way it is, unfortunately, is ridiculous on its face. Gas station operators are prohibited from letting customers pump their own gas. But not always. Motorcycle drivers, for example, may be handed the fuel nozzle so they can fill their own tank. But they are not allowed to return the nozzle to the pump. Instead they must hand it to the attendant, who then returns it. Plainly this provision is idiotic. If a guy standing by his Honda Shadow or Harley, say, can be trusted to fill his tank without setting the station ablaze, why can’t we trust him to hang up the hose?

And then, of course, there are all those card-lock fueling stations where customers fill their own tanks all the time. So the Oregon law makes absolutely no practical sense, especially now that all gas pumps are set up like those in the 48 states where self-service is the rule. (Only New Jersey still follows Oregon’s example. Or maybe it’s the other way around.)

You think about all this when you stop at a station where you have to wait for an attendant to get around to you. It may be only a minute or so, but it seems like much longer when you’re trying to get some place. It’s hard to resist the temptation to insert your card, hit the button for regular, fill your tank and take off. But you don’t want to cause trouble for the kid on duty, the kid who eventually does get around to you. He’s busy, so there’s no question of getting your windshield cleaned. You squeegee it yourself, Oregon not yet having enacted a law against that.

Based on that experience, you may be ready to wish self-service was allowed. But then you remember some of the other Oregon stations where you’ve stopped in the last few weeks. At the ones in Albany, service is usually prompt, and it often includes the windshield. The people working there — not all of them are kids — do a good job, and you don’t want any of them to be out of work.

In Medford, there’s a Chevron station where the owner and his staff not only fill your tank, wash your windshield AND rear window but also – believe it or not — inquire if they should check under the hood. And if you asked them, I’m sure they’d check your tires too. That tradition, rare though it may be, is worth preserving, and with self-service it would disappear. (hh)


3 responses to “Self-service gas? Better not”